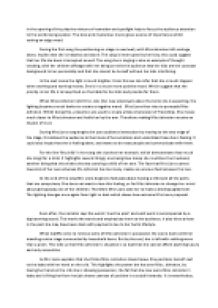 Analyse the the music used in the play 'Blood Brothers'

﻿In the opening of the play the mixture of narration and spotlight help to focus the audience attention to the words being spoken. The slow and mysterious music gives a sense of importance whilst setting an edgy mood. During the first song the positioning on stage is used well, with Miss Johnston left onstage, alone, implies that she is helpless and alone. The song is interrupted by her kids; this could suggest that her life has been interrupted as well. The song she is singing is also an example of thought tracking, with her children offstage with her being on tells the audience that her kids are the constant background to her personality and that she cannot be herself without her kids interfering. In the next scene the light is much brighter. From this we can infer that she is much happier when working and earning money. She is in a much more positive mood. Which suggest that the priority in her life is to keep food on the table for her kids and provide for them. When Miss Johnston tells Mrs L ions (her new employer) about the twins she is expecting, the lighting becomes much darker to create a negative mood. Miss Lions then tries to persuade Miss Johnston. Whilst doing this, proxemics are used to create a false impression of friendship. ...read more.

It made me notice how it was the second time they had been split up, and that surely they should be allowed to be together if they wanted to. The music alone, without the theatre scene suggests a parting or sad event. Therefore it fits with the occasion in the play. An echo is used when Mickey shouts out when he is alone. This is very effective as it adds to Mickey?s lonely attitude, and although there is likely to be someone not too far away from him, the echo makes it seem as if there is nothing and no-one for miles. All contributing to the lonesome feel Mickey is trying to create. When Mrs Lions enquires as to the locket around Edward?s neck, the lighting turns a turquoise-blue, this provokes a mood of interest and curiosity. It then darkens even more when Edward refuses; this tells the audience that Mrs Lions? curiosity has caused her to turn angry. Consequently creating a very anxious mood to the scene overall. When Mickey and Edward both become suspended it sends a message to the audience. It makes them think that although they lead completely different lives they are going through the same things together, as if they were following down similar paths despite the drastic contrast in their lifestyles When Edward and Mickey sing their duet for the first time they use the lyrics ?my friend?. ...read more.

It could also suggest that she is ashamed of what she has done and is reluctant to show her face to anyone. In the song after the death of the twins, Miss. Johnston uses lyrics such as ?tell me it?s not true? and ?say it?s just a story?. By saying that she wishes the whole situation was not true, and ?just a story? we can tell that she is incredibly distraught. It also tells us that she has not got to grips with the fact that her sons have died, and is still hoping for someone to relieve her from her grief, and wake her up from a nightmare. By asking people to tell her that it?s ?not true?, she is asking for someone to help her in the situation she is in. She also explains how she wants it to be something she is hearing on the news. From this we can assume that she wishes it was happening to someone else as oppose to her. All this seems to highlight how bad the state of affairs is. An extract from the poem which is said at the start is read out once again after the two have died. This is symbolic as it is signifying the death of the twins and adds emphasis to the fact that they were the victims in the whole story which the poem is describing ...read more.