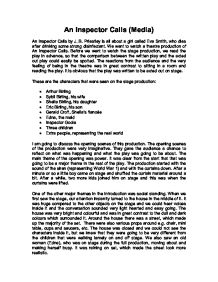 As each character got inspected by the Inspector, the limelight shone on them. This was an interesting use of the lights because in reality that person would have been under the spotlight when they got questioned by the Inspector

An Inspector Calls (Media) An Inspector Calls by J. B. Priestley is all about a girl called Eva Smith, who dies after drinking some strong disinfectant. We went to watch a theatre production of An Inspector Calls. Before we went to watch the stage production, we read the play in advance, so that the comparison between the written play and the acted out play could easily be spotted. The reactions from the audience and the very feeling of being in the theatre was in great contrast to sitting in a room and reading the play. It is obvious that the play was written to be acted out on stage. These are the characters that were seen on the stage production: * Arthur Birling * Sybil Birling, his wife * Sheila Birling, his daughter * Eric Birling, his son * Gerald Croft, Sheila's fianc�e * Edna, the maid * Inspector Goole * Three children * Extra people, representing the real world I am going to discuss the opening scenes of this production. The opening scenes of the production were very imaginative. They gave the audience a chance to reflect on what was happening and what the play was going to be about. The main theme of the opening was power. ...read more.

The little door represented the fact that the Birlings had difficulty moving between the two worlds: their world and the real world. Even as they passed the threshold of their comfort zone boundaries, they did not seem to notice people all around them; they gave the impression that only they themselves and Gerald were alive. They stepped outside on the balcony and gave speeches boasting about themselves and showed no regard for the children or Edna. They seemed deaf to the sirens of the outside world, even though they live in it. During the midst of all that was going on in the centre of the stage, we saw a man walking up the aisle towards the stage. This was a good use of the audience because it sent a ripple of excitement through everyone. As this weird character walked up to the stage, the music suddenly changed from the siren and became harsher. It became more powerful, which was a good literary device because it described the cartoon-like creature that had just arrived, indirectly. Even though there was no spotlight on the new arrival, the sidelight which was used to great effect, gave out a dim shadow, which made the Inspector look bigger than the Birlings house. This melodramatic device made it look like that the Inspector was over-shadowing the Birlings house and made him look more powerful. ...read more.

Birlings' dresses became dirty as they took steps outside the house. As Mrs. Birling stepped outside of the house, Edna placed a rug out for her, because the road, perhaps, was too dirty for her to walk on. Mr. Birling's voice started to get louder and we could tell that he was intimidated by the Inspector, because he kept mentioning his connections with the police force, as if he was trying to scare the Inspector away, Gerald became less sleek and Eric became more sober and like an adult rather than a drunken teenager that he first appeared to be. The audience were used to enhance this production and was used by the Inspector quite a lot. We, the audience, felt as if we were part of the drama, and our reactions to the characters fit in with the play as if they were meant to be there. This production of the play was very attention-grabbing and full of exciting melodrama. The opening scenes were very significant because they set up the base for the whole play. I felt that the lighting was used to great effect; the music always met the reaction that it was meant for; the characters were superb in their acting, from the start to the end; the stage was useful for each character in their own special way; the props were all valuable, but the best of all was the audience and atmosphere of watching the play in a theatre. ...read more.