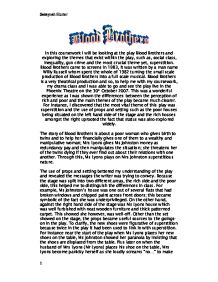 In this coursework I will be looking at the play Blood Brothers and exploring the themes that exist within the play, such as, social class, inequality, gun crime and the most crucial theme yet, superstition. Blood Brothers came to screens in 1983, it was written by a man name Willy Russell whom spent the whole of 1982 turning the small scale production of Blood Brothers into a full scale musical. Blood Brothers is a very theatrical production and so, to help me with my coursework, my drama class and I was able to go and see the play live in the Phoenix Theatre on the 30th October 2007. This was a wonderful experience as I was shown the differences between the perception of rich and poor and the main themes of the play became much clearer. For instance, I discovered that the most vital theme of this play was superstition and the use of props and setting such as the poor houses being situated on the left hand side of the stage and the rich houses amongst the right uprooted the fact that status was also explored widely. The story of Blood Brothers is about a poor woman who gives birth to twins and to help her financially gives one of them to a wealthy and manipulative woman; Mrs Lyons gives Ms Johnston money as redundancy pay and then manipulates the situation; she threatens her of the twins dying if they ever find out about their relations with one another. ...read more.

For example, a red light was shunned on the characters whenever there was a scene that showed superstition. To clarify, when Mr Lyons placed his shoes on the table and Mrs Lyons panicked the red light drew attention to the scene. This was very effective as it created suspense and therefore was good at 'marking the moment' There was a darker, more eerie lightning state whenever the narrator entered the stage which built on the frightening affect the narrator had on the audience. My favourite character had to be Mickey as he always made a dramatic appearance on stage. When he was at the tender age of seven he was shown to be a very bubbly an energetic child. I loved his use of body language; for instance he always used his fingers to show he was eight which was very realistic as most children nowadays would do the same. When his mother, Ms Johnston was talking to him he was always fidgeting by either placing his hands in his t-shirt and consistently twisting it around or rubbing his knees and legs together as if they were itching. I loved that he was always loud and expressive like when he and Mickey made a joke he would burst out laughing as though his mouth was a microphone that couldn't lower its volume. ...read more.

At times during the play the pace was a bit slow. This to me was because of all the continuous songs being played. It came to a point were I was getting bored of the same songs and the frustration did begin to show in my face. It wasn't all bad though because I thought some of the sound effects like the one played when the narrator appeared on stage, the sound of the music created a gloominess affect, as the music was daunting and the sound was there to show that, something dreadful was about to happen. This also kept me going as it was a good way of leading up to the happenings in the play. Taken as a whole, I would describe the play as brilliant; it was such an emotional play and therefore brought tears to my eyes. I enjoyed the acting out of the characters because I thought they were all entertaining to watch and the music made me emotional. The fact that I watched this production in the theatre could really help with my future carer as I would love for some day to come where I, myself could get the opportunity of working in theatre and have people watching me. ?? ?? ?? ?? Sakaynah Hunter 1 ...read more.