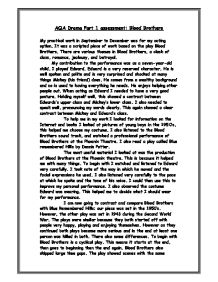 AQA Drama Part 1 assessment: Blood Brothers My practical work in September to December was for my acting option. It was a scripted piece of work based on the play Blood Brothers. There are various themes in Blood Brothers, a clash of class, romance, jealousy, and betrayal. My contribution to the performance was as a seven-year-old child. I played Edward. Edward is a very reserved character. He is well spoken and polite and is very surprised and shocked at many things Mickey (his friend) does. He comes from a wealthy background and so is used to having everything he needs. He enjoys helping other people out. When acting as Edward I needed to have a very good posture. Holding myself well, this showed a contrast between Edwards's upper class and Mickey's lower class. I also needed to speak well, pronouncing my words clearly. This again showed a clear contrast between Mickey and Edward's class. To help me in my work I looked for information on the Internet and books I looked at pictures of young boys in the 1950's, this helped me choose my costume. ...read more.

Sammy was the character with the highest status he was a bully and bullied everyone else into liking him. This was clearly obvious by the way Mickey and his friends cowered when Sammy was around and did everything he told them. Mickey had the next highest status he was still a bully but not as high status as Sammy. When Sammy was not around, Mickey was in charge, but when Sammy was around Mickey stayed quiet. Edward was not a bully at all, he was well spoken and polite, he got along well with Mickey. He was good friends with Mickey and shared his sweets with him; He would do what Mickey wanted without arguing. However as they grew up this status began to change and Edward had the highest status as he was now Councillor Eddie Lyons, and Mickey and Sammy had a Lower status as they committed crimes such as robbery. At the beginning of Blood Brothers the girls were seen to have a lower status than the boys, they did what they were told. However as they grew up Linda had a higher status and was respected by all the boys. ...read more.

We choose to perform in a very exaggerated way as the children in Blood Brothers. All facial expressions and dialect should be exaggerated. This helped the audience see the actors as children. As teenagers the role should again be played in a slightly exaggerated way, but this time exaggerating the body language and slurred slower paced speech. This again gave helped the audience realise they were now watching teenagers. Finally as adults the role should be played more seriously. This part of the play is serious and if played well very emotional. People are killed in the final scene and the acting needs to be serious and not exaggerated at all. When Mickey and Edward are killed it is very emotional, good acting can bring the audience to tears. I conclusion, I would like to say that I have learnt that Blood Brothers and Blue Remembered hills have many things in common and many things that are different. When studying Blood Brothers I learnt how to play an exaggerated role of a young excited child. I also learnt to play a serious emotional ending. After watching Blood Brothers performed by professionals and studying the way they act carefully I believe I can now portray a seven-year-old character that comes from a wealthy background. ...read more.