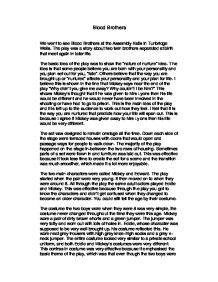 Blood Brothers We went to see Blood Brothers at the Assembly Halls in Tunbridge Wells. The play was a story about two twin brothers separated at birth that meet again in later life. The basic idea of the play was to show the "nature of nurture" idea. The idea is that some people believe you are born with your personality and you plan set out for you, "fate". Others believe that the way you are brought up or "nurtured" affects your personality and your plan for life. I believe this is shown in the line that Mickey says near the end of the play "Why didn't you give me away? Why couldn't I be him?" This shows Mickey's thought that if he was given to Mrs Lyons then his life would be different and he would never have been involved in the shooting or have had to go to prison. This is the main idea of the play and it is left up to the audience to work out how they feel. ...read more.

He wore neat grey trousers with high grey knee-high socks and a grey v-neck jumper. The entire costume looked very similar to a private school uniform, and both Eddie and Mickey's costumes were very different. This contras in costume was very effective because it emphasised the basic theme of the play, which was that even though the two boys were brothers, the situation that life had dealt them could make them very different. Another effective technique used was cross cutting in the form of "flashback". The entire play was as a flashback and was told, as a story the narrator knew. It made it interesting because you knew that both characters would die at the end and this made you want to know how it happened. When I saw this scene I wanted to know how the story would progress and I wanted to learn even more about the characters and their personality. The narrator who told the story was a clever character because he both interacted with the characters but couldn't be seen most of the time. ...read more.

I liked this because it made me think what was happening and picture the characters offstage because I could only hear their voices. The musical also broke the fourth wall several times. The first time the fourth wall was broken was when the narrator first entered. He asked a rhetorical question, "Did you hear the story of the Johnstone twins?" A rhetorical question makes the audience feel more involved. The fourth wall was also broken during the song "My Friend" when both Eddie and Mickey sang about their friend to the audience. At the very end of the play the policemen actually walked through the audience and stood at the sides of the stage. This was effective because it made the audience feel very involved and feel as though they were an onlooker or a person there watching the terrible event happen, and this also helped to provoke emotion at a vital point at the very end of the play. Overall this play or musical was very interesting. It used many devices and the set and lighting were used to aid the storyline well and it was a fun and lively piece. ...read more.