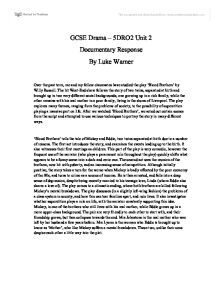 Blood Brothers Evaluation. After we watched Blood Brothers, we acted out certain scenes from the script and attempted to use various techniques to portray the story in many different ways.

GCSE Drama - 5DRO2 Unit 2 Documentary Response By Luke Warner Over the past term, me and my fellow classmates have studied the play 'Blood Brothers' by Willy Russell. The hit West-End show follows the story of two twins, separated at birth and brought up in two very different social backgrounds; one growing up in a rich family, while the other remains with his real mother in a poor family, living in the slums of Liverpool. The play explores many themes, ranging from the problems of society, to the possibility of superstition playing a massive part on life. After we watched 'Blood Brothers', we acted out certain scenes from the script and attempted to use various techniques to portray the story in many different ways. 'Blood Brothers' tells the tale of Mickey and Eddie, two twins separated at birth due to a number of reasons. The first act introduces the story, and examines the events leading up to the birth. It also witnesses their first meetings as children. ...read more.

This scene studies the events leading up to the birth of the twins, and how Mrs Johnstone could be convinced to give up one of her sons. The main reason for her seemingly cruel decision was to still be able to look after her family financially. She claims that had she only one child, she could provide enough food for everyone, however with any more it was impossible. To make this scene interesting, we used a range of different techniques. The first and most obvious was role-play, a drama medium (various ways to communicate dramatically to the audience). We did this by attempting Liverpudlean accents, doing different gestures, and moving in unique ways that we believed the characters would in real life. In this scene, I played the milkman and gynaecologist. The milkman had a very stereotypical Liverpudlean voice, and a slightly lazy posture to illustrate his boredom of delivering milk day in and day out. The gynaecologist however, was quite the opposite. He was well-spoken, and took a rather positive view on life. ...read more.

This scene was one of the last parts in the play where Mickey is sane, and shows what may have led him to go mad, and kill his former best friend. One group did the final scene, where both die. This scene is ultimately tragic, but also shows the consequences certain actions can have in the future. When Mickey shoots Eddie, they used slow motion (an explorative strategy) to show the importance of that scene. Overall, the work we have done so far has greatly improved my understanding of how to perform a scripted play to the audience by also using interesting techniques to portray a certain message. The work of other groups worked impeccably well at portraying the story behind the play, as did the work of ours. The range of techniques used created memorable and believable scenes that kept the audience captivated, and wanting more. The work this term has contributed greatly to my understanding of drama, and how to appreciate as well as enjoy other pieces of work that utilise these techniques. Words: 1,100 ...read more.