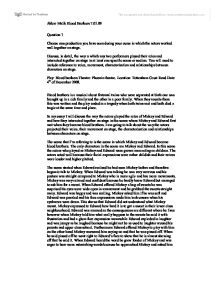 Blood Brothers. In my essay I will discuss the way the actors played the roles of Mickey and Edward and how they interacted together on stage in the scene

Question 7 Choose one production you have seen during your curse in which the actors worked well together on stage. Discuss, in detail, the way n which any two performers played their roles and interacted together on stage in at least one specific scene or section. You will need to include reference to voice, movement, characterisation and relationships between characters on stage. Play: Blood brothers Theatre: Phoenix theatre. Location: Tottenham Court Road Date: 4th of December 2008. Blood brothers is a musical about fraternal twins who were separated at birth one was brought up in a rich family and the other in a poor family. When they reunite there fate was written and the play ended in a tragedy when both twins met and both died a tragic at the same time and place. In my essay I will discuss the way the actors played the roles of Mickey and Edward and how they interacted together on stage in the scene where Mickey and Edward first met when they became blood brothers. ...read more.

a glum face expression meanwhile Edward exploded in laughter and was jumpy as he laughed because he might not be as used to laughter around his parents and upper class school. Furthermore Edward offered Mickey to play with him on the other hand Mickey answered him saying no and that he was pissed off. When he said pissed off he went right to Edward's face to show that he is almost showing off that he said it. When Edward heard the word he grew fonder of Mickey and was eager to hear more astonishing words because he approached Mickey and asked him if he knew more words like that. Mickey replied saying he knew a lot of words like that, when he said that he said it with ease and confidence so he could impress Edward. Before Mickey could tell Edward the F word Mickey looked around to see if there was anyone there while he was looking his facial expression looked sneaky and like he was up to something afterwards Mickey went close to Edwards ear to whisper so no one could eavesdrop what that he said the F word. ...read more.

Thereupon Mickey asked Edward how old he was and he said that he was seven still Mickey said he was older and nearly eight and so did Edward then they realised they were born on the same day Mickey and Edward were astonished. Mickey offered him the chance to be his blood brother later Mickey produced a pen knife Edward was frightened but didn't say that he was but you could tell by his facial expressions then they clamped hands together and said quote after quote after each other then at the last quote Sammy entered and their duo scene ended. The chemistry between both actors was excellent they presented the roles of Mickey and Edward excellently. The facial expressions looked great and they followed the script beautifully in this scene especially. Finally I learned a lot from this experience and I recommend everyone to watch it ?? ?? ?? ?? Akbar Malik Blood Brothers 7.01.09 ...read more.