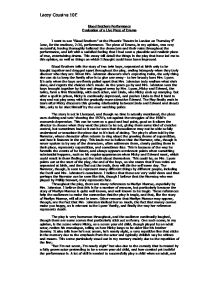 Blood Brothers Performance Evaluation of a Live Piece of Drama I went to see "Blood Brothers" at the Phoenix Theatre in London on Thursday 9th June, for the matinee, 2:30, performance. The piece of Drama, in my opinion, was very successful, having thoroughly believed the characters and their roles throughout the performance, and left with a satisfied feeling that I had seen a plausible and realistic piece of true, entertaining drama. This essay will detail the things in the play that have led me to this opinion, as well as things on which I thought could have been improved. Blood Brothers tells the story of two twin boys, separated at birth only to be bought together and dragged apart throughout the play, ending in tragedy when they truly discover who they are. When Mrs. Johnston discovers she's expecting twins, the only thing she can do to keep the family alive is to give one away - to her broody boss Mrs. Lyons. It's only when the boys are firmly pulled apart that Mrs. Johnston truly realises what she's done, and regrets the choices she's made. As the years go by and Mrs. Johnston sees the boys brought together by fate and dragged away by Mrs. Lyons, Micky and Edward, the twins, form a firm friendship, with each other, and Linda, who Micky ends up marrying. But after a spell in prison, Micky is continually depressed, and pushes Linda to find it hard to stay and not play away with the gradually more attractive Edward. The Play finally ends in tears after Micky discovers this growing relationship between Linda and Edward and shoots him, only to be shot himself by the over watching police. The story is set in Liverpool, and though no time is actually mentioned, the piece uses clothing and sets' showing the 1970's, set against the struggles of the 1980's economic depression. ...read more.

The scene shows how sad Mrs. Johnston's life is, and how much of a struggle it is for her to cope. The music featured within the piece plays a very strong part in creating an atmosphere, and was one of the highlights of the show. I believe that the music contributed to the action throughout the show, but especially at the end, and at any point when the mood changed, for example when the Johnston family moved. The music often highlights or creates tension, and songs very often tell a story, revealing the mood of the character and setting the scene. The background music often helped to keep the pace of the show up, keeping it interesting, and though repetition of songs can sometimes become boring, the repetition of the Narrator's song "Shoes Upon The Table" emphasised the link of superstition within the story, making the audience refer back to the event that occurred at the beginning of the show. The set used within the play was very effective though very simple, with the main set never changing. One feature of the set was the way the stage was cleverly raked, allowing all audience to see the entirety of the events occurring on the stage, including actors behind others, who perhaps would not have been able to see had the stage not been raked. One point about the show that kept it flowing and clearer to understand was the fact that it had no blackouts or scene changes. This meant, though, that props used on the stage were often the actor's responsibility, with them having to carry them on and off the stage. Though some people may see this as a problem, and though it did make the work more difficult for the actors, in my opinion, it was a lot better to have this technique used then for there to have been scene changes, which would have defiantly lost some the tension, pace and smoothness that the play featured. ...read more.

Another thing that shows the boys' youth is the way neither of them can stay still, as they fidget all over the stage throughout most of their scenes as kids. The way they actually moved also revealed a lot about the age of the character they were playing, sliding on the floor and stomping around, as well as jumping and running, attributing to their youthfulness. Their body language, gestures and the way they played games additionally showed the way they were pretending to be seven year old boys. Many of the characters within the play used gestures and voice to show the character they were playing and their status, for example the differences between Mrs. Johnston and Mrs. Lyons. At the beginning, when Mrs. Johnston is pregnant and working at the Lyons' house, she is very common with a strong Liverpudlian accent. The character is shown to be quite weak, and the costume she wears also shows off her standard of living - she is quite poor. Mrs. Lyons, however, is clearly from a much better class, shown in her speech, the fact she has no accent, the way she walks and stands and in her clearly expensive costume. The changes are apparent within everything, and from the audiences point of view it was clear who the actors were playing and the type of character they were meant to be. Overall, I think the play was an extreme success. Many pieces of the show made me laugh, sad, and I even cried at the end of the performances, after a particularly moving show, that was not only well written and well acted, but well performed. All aspects of the show lived up to their expectations, and simple as everything was, it was one of the most effective and believable pieces of drama I have ever seen. I enjoyed the performance very much, and due to the brilliant performance I saw, would not hesitate to go and see it again. Lacey Cousins 10E ...read more.