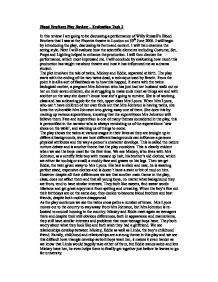 Blood Brothers Play Review - Evaluation Task 2 In this review I am going to be discussing a performance of Willy Russell's Blood Brothers that I saw at the Phoenix theatre in London on 30th June 2006. I will begin by introducing the play, discussing its form and content. I will then examine the acting style. Next I will evaluate how the scientific elements including Costume, Set, Props and Lighting helped to enhance the production. I will then discuss the performance, which most impressed me. I will conclude by evaluating how much this production has taught me about theatre and how it has influenced me as a drama student. The plot involves the tale of twins, Mickey and Eddie, separated at birth. The play starts with the ending of the two twins dead, a technique used by Brecht. From the point it is all a sort of flashback as to how this happed. ...read more.

His hair is slick and neat, he is wearing perfect sized, expensive clothes and is doesn't have a stain or bit of mud on him. However despite all their differences we see that another main theme in the play, class, does not affect them and that all young boys, no matter what background they are from, tend to have similar interests. They both like sweets, find swear words hilarious and get great enjoyment from spitting and urinating. When the boy's fins out their birthdays are on the same day, they decide to become blood brothers and best friends, despite both mothers disapproval. As the play continues we see the twins cross paths a number of times. Mrs Lyons moves out to the country to stay away from Mrs Johnston, but Mrs Johnston is re-located to council housing in the country. Mickey and Eddie meet again as teenagers there and despite their still obvious differences, both in appearance and mannerisms, they still have similar interests and problems that most teenage boys have. ...read more.

The genre of the play is musical, this allows the play to keep the audiences attention by mixing the acting with the songs, and keep things exciting. Blood Brothers has a strong mix of Comedy and Tragedy, this works well as the storyline is serious and gripping but there is some release and enjoyment in watching. It has been influenced by Brecht as it uses out of action narration and direct address to inform the audience of the ending before the action begins. Due to the direct address to the audience there are often moments when the audience are left to make up there own mind. It is these reasons that this could be seen as a political theatre. I believe that is the entertaining acting, gripping plot and more than anything, the universal themes that have remained so relevant to lives of all backgrounds, which make this play so enjoyable and as successful as it has been for all these years. ...read more.