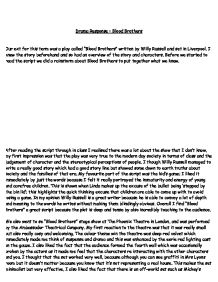 Drama Response - Blood Brothers Our ext for this term was a play called "Blood Brothers" written by Willy Russell and set in Liverpool. I knew the story beforehand and so had an overview of the story and characters. Before we started to read the script we did a rainstorm about Blood Brothers to put together what we knew. After reading the script through in class I realised there was a lot about the show that I don't know, my first impression was that the play was very true to the modern day society in terms of class and the judgement of character and the stereotypical perceptions of people. I though Willy Russell managed to write a really good story which had a good story line but showed some down to earth truths about society and the families of that era. My favourite part of the script was the kid's game; I liked it immediately by just the words because I felt it really portrayed the immaturity and energy of young and carefree children. This is shown when Linda makes up the excuse of the bullet being 'stopped by the bin lid'; this highlights the quick thinking excuse that children are able to come up with to avoid losing a game. In my opinion Willy Russell is a great writer because he is able to convey a lot of depth and meaning to the words he writes without making them blindingly obvious. ...read more.

We wanted to keep parts of it the same to keep the feeling of the show; however we wanted to change some bits to improve it. For example, we wanted Mrs Johnston to face forwards than backwards so the audience can see the emotion in her face when the narrator is telling the story about the two brothers. We also had the chorus run on from upstage left during the song because we felt that the beginning of the song was too emotional and it was not right to have he stage filled with chorus actors because it would spoil the scene being created by the song. The narrator sat at the front of the stage just in front of the fourth wall line to give the audience the feeing that the narrator is also watching the show rather than being in it. He sat very casually with one leg drawn up and the other hanging down over the front of the stage. This gives an impersonal feel and indicates the narrator is not a character in the show. Once he crossed the fourth wall line he entered the story and was no longer watching it, he was in it. In the show Willy Russell staged the narrator standing up and Mrs Johnstone facing backwards, I think this was used by Russell to show that the Narrator is telling the story. ...read more.

We chose this activity because it is deemed socially acceptable as a past time, Mrs Lyons is reading to Edward from the sofa and Mr Lyons is reading the newspaper. We wanted to show Mr Lyons as a professional business man, we did this by him sitting in an armchair with his leg crossed over the top of one another to show masculinity. The second tableau depicted a family meal time and like before the two families are extremely different, the Lyons are eating politely with correct cutlery and civil manners. To show this we arranged the chairs in a neat order and directed the actors to sit with their legs still, their arms tucked by their sides and miming holing their cutlery in the correct fashion. All this helps create the impression of upper class society. The Johnstone family are the complete opposite of the Lyons, we used body positions such as throwing food and talking with their mouth full to show bad manners at the dinner table. We mimed throwing food in an exaggerated form to show the silliness of children. This shows the audience they are uncivilised children whose mother has not raised them properly because of her class. Although this may not be necessarily true we felt that this was the social message that Russell was trying to get across. The last scene showed a family picture because although quite simple we felt that it could reveal a lot about the family. ...read more.