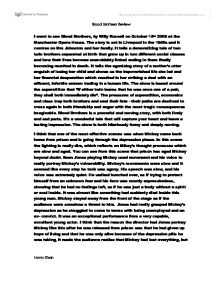 I went to see Blood Brothers, by Willy Russell on October 15th 2009 at the Manchester Opera House. The story is set in Liverpool in the 1960s and it centres on Mrs Johnston and her family. It tells a demoralizing tale of two twin brothers separated at birth that grew up in two different social classes and how their lives become unavoidably linked ending in them finally becoming reunited in death. It tells the agonising story of a mother's utter anguish of losing her child and shows us the impoverished life she led and her financial desperation which resulted in her striking a deal with an affluent, infertile women trading in a human life. The show is based around the superstition that "If either twin learns that he was once one of a pair, they shall both immediately die". The pressures of superstition, economics and class trap both brothers and seal their fate - their paths are destined to cross again in both friendship and anger with the most tragic consequences imaginable. Blood Brothers is a powerful and moving story, with both lively and sad parts. It's a wonderful tale that will capture your heart and leave a lasting impression. The show is both hilariously funny and deeply moving. I think that one of the most effective scenes was when Mickey came back home from prison and is going through the depression phase. In this scene the lighting is really dim, which reflects on Mikey's thought processes which are slow and aged. ...read more.

challenge for Jones but he took it up making it really seem like 3 different actors played Mickey as he developed into adulthood. The set throughout the play varied little, there being only one main set change between Acts one and two. Many of the smaller set changes were shown by adding extra furniture and extra props. Act one centred around about 3 rough, crimson terraced houses. The houses are extremely small and all have the same look of being overcrowded and confined to an undersized space. The houses all have the same rudimentary appearance to them. Towards the back of the stage is a darkened alley which has been smothered in graffiti which portrays crime and destruction which would have been common in places like that. The houses loom over the stage, showing lack of space and although the stage is brightly lit this contrast greatly with the dark red of the bricked houses. The overall mood is one of poverty and the constant fight for endurance. Opposite the terraced houses was one large house that represented Mrs. Lyons house, there was a gap between the terraced houses and Mrs. Lyons house, this shows the class divide between the rich and the poor. Act Two begins with a great feeling of hope and new beginnings. Because the family have now been re-housed we can now see a difference in the once claustrophobic set. Although the houses are still terraced, the sinister alleyway has disappeared being replaced with a fence and style and vast fields that ...read more.

In this case, Mickey and Eddie were born together and died together. I also believe that this play carries a message of love, but also how love can bring you hatred. Mrs. Lyons love for Edward brought her hatred for Mrs. Johnstone, who was the woman who gave her the child in the first place. And finally, I believe the play contained a message of wanting more than you can have. All of the characters wanted something in their lives, but even when they had what they wanted, they all had a downfall. Receiving what they wanted only brought them misery. I think that the director was successful in his aims of achieving the effect that he/she had been looking for, and I think their aim was to achieve awe, wonder, grief, elation and pain. I think that their aim was to have the audience so deeply involved that it felt like you were part of what was happening on stage and not just watching it from the sidelines and I think that the director managed that spectacularly. I though the play was really powerful and I was really moved by what I saw on stage, I think that I will remember this play because of the message it carried out to me, (The truth will always be known, no matter how much you try to hide it). Overall I thought that the play was amazing and I would definitely recommend it. ?? ?? ?? ?? Blood Brothers Review Nova Khan ...read more.