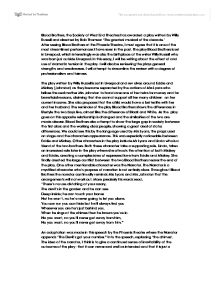 Blood Brothers, Review Of Play. A*

Blood Brothers, the Society of West End Theatres has awarded a play written by Willy Russell and directed by Bob Thomson 'The greatest musical of the decade.' After seeing Blood Brothers at the Phoenix Theatre, I must agree that it is one of the most streamlined performances I have seen in the past. The play Blood Brothers is set in Liverpool, which interestingly was also the birthplace of the writer Willy Russell who was born just outside Liverpool. In this essay, I will be writing about the effect of and use of dramatic tension in the play. I will also be reviewing the plays general strengths and weaknesses. I will attempt to streamline the review with a degree of professionalism and fairness. The play written by Willy Russell is set In Liverpool and revolves around Eddie and Mickey (Johnston) as they become separated by the actions of Mrs Lyons who bribes the real mother Mrs Johnston to hand over one of her twins for money and for beneficial reasons, claiming that she cannot support all her many children on her current income. She also proposes that the child would have a better life with her and her husband. The reminder of the play Blood Brothers shows the differences in lifestyle the two boys live, almost like the difference of Black and White. ...read more.

She was in clear desperation to achieve this goal and the actress achieved tension by increased use of facial body language and change in voice. These scenes were written and directed well, and the set was appropriate so emphasis was on the characters in focus. The effect of this tension was that the audience was able to feel the desperation Mrs Lyons had. The relief and happiness and the contrast with Mrs Johnston when the twin was finally handed over empathised the dissimilarity between these two characters and their difference in status. Another Tension of the task scene was those by Eddie. He was presented with many different tasks with Mickey. For example sneaking out the house, but most of all going down to the area where Mickey lived. Eddie had various choices and worries about going to visit Mickey; he knew his mother did not approve but he was unable to comprehend her reasons. His on stage actions and facial expressions were finely tuned so that the audience was aware that he was making complex decisions in his mind. This was effective at creating tension in the earlier stages where the audience was not able to determine whether it was his character to disobey his mother's request to stay away vs his friendship over Mickey. Mickey also integrated Tension of the task, he wanted to fall in love with Linda. ...read more.

Mrs Johnston's, 'Go dancing' songs were good at first but decrease in value as the play went on- sometimes I felt the songs placement was poorly thought out- as was its length. I also felt the Narrator was underused somewhat. His reason for being was never really made clear, perhaps he should have had more interaction with the characters. Mrs Lyons, body language I thought was especially good when faced with the narrator and she should be congratulated on delivering a solid performance in this regard. As was the acting by Eddie and Mickey; both character delivered strong performances, especially when the characters were in a younger stage. The adult performers pulled off a childhood effect with great accuracy and strength that deserves complementing. Infact the overall quality of the acting was very good. The Narrator spoke loudly and with clarity, and created an impressive atmosphere with his voice. Cast members seemed to be well aware of there lines and scripts, I was unable to fault the acting from a fixed script. If any improvisation did occur, it was done very well and was accepted and developed precisely. It was clear the effect of Blood Brothers was well received by the audience; I noticed that many people had enjoyed the showing. There was much talking about the narrator and how effectively he was at bringing the story together, even when perhaps I disagree In this regard. Overall, a strong spectacular performance that I would recommend to all. ...read more.