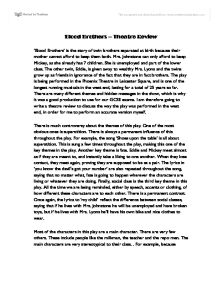 Blood Brothers - Theatre Review 'Blood Brothers' is the story of twin brothers separated at birth because their mother cannot afford to keep them both. Mrs. Johnstone can only afford to keep Mickey, as she already has 7 children. She is unemployed and part of the lower class. The other twin, Eddie, is given away to wealthy Mrs. Lyons and the twins grow up as friends in ignorance of the fact that they are in fact brothers. The play is being performed in the Phoenix Theatre in Leicester Square, and is one of the longest running musicals in the west end, lasting for a total of 25 years so far. There are many different themes and hidden messages in the show, which is why it was a good production to use for our GCSE exams. I am therefore going to write a theatre review to discuss the way the play was performed in the west end, in order for me to perform an accurate version myself. There is much controversy about the themes of this play. One of the most obvious ones is superstition. There is always a permanent influence of this throughout the play. For example, the song 'Shoes upon the table' is all about superstition. This is sung a few times throughout the play, making this one of the key themes in the play. Another key theme is fate. Eddie and Mickey meet almost as if they are meant to, and instantly take a liking to one another. ...read more.

This could be to interpret how fast Mickey has been forced into acting older, whilst now Eddie is the one who gets to have all the fun. This sudden switch of colour and is reflected when Mickey says to Eddie 'but your still a kid. An' I wish could be as well Eddie... but I cant, because while no-one was looking grew up. An' you didn't, because you didn't need to'. To set the scene on one half of the stage we saw terraced houses. On the opposite side was Mrs. Lyons house. To move from one to the other the characters simply walked along the front of the stage to the other side. This gave us the ideas that not only did they not have their houses near each other they didn't have them very close either. Once again, this reinforced the idea of social classes being separate and leading separate lives. The main set change was just before the end of the first half, when the background of the city changed into fields in the countryside. The rest of the set did not really change, apart from the colours of the doors on the terraced houses. When showing the inside of the house, the colours were very different. Mrs. Johnstone's home was very colourful with a lot of character inside it. It wasn't very nice, but it was a lot more cheerful than Mrs. Lyons. Mrs. Lyons home was very much of the same colours and patterns. ...read more.

At other points, lighting was only used to demonstrate night and day. Occasionally, such as when Mickey was in prison, the lighting represented mood, as it was very dark and dingy whilst he and Linda were talking. This helps to show us he is depressed without us even having to be told. However, whenever the lighting was used to represent night, this was also when most of the bad things in the play happened, such as when Mrs. Lyons tries to kill Mrs. Johnstone. The lighting was bright during times such as when the johnstones moved into the country side. Personally, I enjoyed this play. I think it carried across a message of destiny, when you are meant to be with someone no matter what you will always be together in a way. In this case, Mickey and Eddie were born together and died together. I also believe that this play carries a message of love, but also how love can bring you hatred. Mrs. Lyons love for Edward brought her hatred for Mrs. Johnstone, who was the woman who gave her the child in the first place. And finally, I believe the play contained a message of wanting more than you can have. All of the characters wanted something in their lives, but even when they had what they wanted, they all had a downfall. Receiving what they wanted only brought them misery. i think the only problem with the play was how Mrs. Johnstone kept falling out of character, and Eddie didn't seem like a child when he was meant to. Other than that, the play was amazing and I would definitely recommend it. ...read more.