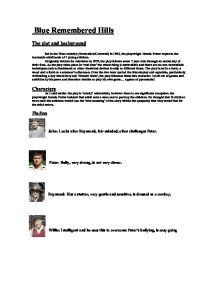 Blue Remembered Hills The plot and background Set in the West country (Devonshire/Cornwall) in 1943, the playwright Dennis Potter explores the traumatic childhoods of 7 young children. Originally written for television in 1979, the play follows seven 7 year olds through an actual day of their lives. As the play takes place in 'real time' the whole thing is naturalistic and there are no non naturalistic techniques such as flashbacks or other theatrical devices to skip to different times. The play is set in a barn, a wood and a field on a summer's afternoon. Over the two hour period the friends play and squabble, particularly victimizing a boy whom they call 'Donald Duck', the play climaxes when this character is left out of games and activities by his peers and therefore decides to play his own game... a game of pyromania! Characters As I said earlier the play is 'totally' naturalistic, however there is one significant exception: the playwright Dennis Potter insisted that adult actors were cast to portray the children. He thought that if children were used the audience would lose the 'true meaning' of the story within the sympathy that they would feel for the child actors. The Boys John: Looks after Raymond, fair-minded, often challenges Peter. Peter: Bully, very strong, is not very clever. Raymond: Has a stutter, very gentle and sensitive, is dressed as a cowboy. Willie: Intelligent and he uses this to overcome Peter's bullying, is easy going The Girls Angela: Very bossy, pretty and very flirtatious for a seven year old, very self-centered. Audrey: Always trying to be Angela's friend, very plain, overshadowed by Angela. The victim Donald Duck: Boys don't like him very much, girls allow him to play 'house' with them. Very lonely as everyone taunts and bullies him. He is abused. Important hidden characters Wallace Wilson: class bully, hear lots about him but never actually see him. ...read more.

He howls but is totally submissive. C- Used to violence? Hates it because his name is not friendly, derogatory term. D- Donald wouldn't show Willie his jam jars until he threatened to kick his head in. The boys think he is a weed and a cry baby "one punch and he'll give in" C-They know past history, again evident from Angela in the barn. They use it against him. D- He's got hold of a box of matches by going through his mam's handbag. The boys discuss how she knocks him about, he sets light to the coal shed after she locks him up in it. C- Pyromania, get rid of bad memories. Fire is something he can control, shows status, redeeming feature. Development section We were asked to get into groups of 4 and elaborate and create a piece of drama around the stimulus below. We decided to use flashbacks to portray Donald's emotions. Flashbacks represent and explore the background and emotions of a character or a story; we used this as we believed this to be an appropriate way to portray Donald's motives. As flashbacks are used to provide information about a characters past to explain a present situation. We chose to pick scenes where Donald was being abused and victimized by a variety of different people. We portrayed a life of sadness and abuse in all of our scenes. We also used imaging to represent Donald's feelings beneath the surface of his actual character. 1st Flashback We showed the thing Donald most longs for...his Dad. We tell the audience through dialogue how his father went to war and Donald begged him not to go. 2nd Flashback We showed how mother abuses him and how he is really scared of her. 3rd Flashback Here we denoted from the text. Audrey "smack er one Donald" Angela" Yes, and if he hits me I shall tell is mam. ...read more.

Silence was the most effective form of sound, as it symbolized how both boys had suffered in silence. Silence also made the scene awkward and built up tension. Make up I wouldn't use any 'fantasy make up' however I would use a mixture of 'straight make up' and 'character make up' to add dirt and wounds and scars. Masks Masks could be worn by both characters at the start of the scene and then removed when the boys feel comfortable opening up about their lives. This would make the audience aware of the boys' feelings towards each other. Lighting At the beginning where Donald is alone and rocking, I believe that a stropescope (where lighting flickers to a rhythm would be really effective. Throughout the piece I would use a fresnel spot as it would create a soft effect as it spreads the light more gently. Another advantage of using this lighting is that it can be focused on a character at an important time. I would use either a white (innocence) or blue (sadness) cinemoid (gel). Levels Both boys were sat down to show they are not very powerful or confident. Both stand up at the end however to show how they have become confident in each others company. Set and Props A haystack (or substitute) to symbolize the barrier between the boys. Movement We wanted very little movement to show the tension and awkwardness between the boys. Voice Use both high and low volume depending on the characters mood and confidence. We also changed our tone depending on our confidence. We used appropriate spoken language in our piece. Staging I believe there to be 2 effective staging Proscenium arch and traverse. Proscenium arch This enables the audience to see both sides of the haystack, and both boys actions and reactions to each other. However the audience is not 'close' to the scene. Traverse This is effective as the audience feel 'close' to the actors this enforces the tension upon them. Although the audience are nearer it is quite possible that they are unable to see both characters due to blocking. ...read more.