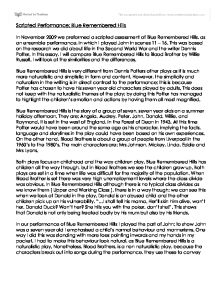 Scripted Performance: Blue Remembered Hills In November 2009 we preformed a scripted assessment of Blue Remembered Hills, as an ensemble performance, in which I played John in scenes 11 - 16. This was based on the research we did about life in the Second World War and the writer Dennis Potter. In this essay, I will compare Blue Remembered Hills to Blood Brother by Willie Russell. I will look at the similarities and the differences. Blue Remembered Hills is very different from Dennis Potters other plays as it is much more naturalistic and simplistic in form and content. However, the simplicity and naturalism in the writing is in direct contrast to the performance; this is because Potter has chosen to have his seven year old characters played by adults. This does not keep with the naturalistic themes of the play; by doing this Potter has managed to highlight the children's emotion and actions by having them all most magnified. ...read more.

In Blue Remembered Hills although there is no typical class divides as we know them ( Upper and Working Class ), there is in a way though; we can see this when we look at Donald in the play. Donald is an abused child and the other children pick up on his vulnerability, "...I shall tell his mama. Her'll skin him alive, won't her, Donald Duck? Won't her? She hits you with the poker, don't she!". This shows that Donald is not only being treated badly by his mum but also by his friends. In our performance of Blue Remembered Hills I played the part of John; to show John was a seven year old I emphasised a child's normal behaviour and mannerisms. One way I did this was standing with more toes pointing inwards and my hands in my pocket. I had to make this behaviour look natural, as Blue Remembered Hills is a naturalistic play. ...read more.

This also means that the characters have to look more closely at their actions, mannerisms and body language; as the audience with interpret all of these to determine what the character is thinking and feeling. For this reason when I played John, I had very obvious signs to show his emotions, for example, when he was angry I would screw my face up, talk extremely fast and keep my arms crossed. On the contrary, if he was scared I would have my hands clasped together in front of me, my head bowled. My posture would be lowered and I would speak in an uncertain voice. Both Blue Remembered Hills and Blood Brothers use props and costumes. In our performance we used back projections to show particular location, for example the barn would be symbolised by hay. These enabled the audience to distinguish each setting. Overall, I have learn that Dennis Potter does not write simply plays, and that although they seem to be simple at first, as you study it in depth you realise that he says a lot about the society and human behaviour. ...read more.