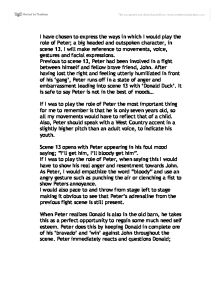 I have chosen to express the ways in which I would play the role of Peter; a big headed and outspoken character, in scene 13. I will make reference to movements, voice, gestures and facial expressions. Previous to scene 13, Peter had been involved in a fight between himself and fellow brave friend, John. After having lost the right and feeling utterly humiliated in front of his 'gang', Peter runs off in a state of anger and embarrassment leading into scene 13 with 'Donald Duck'. It is safe to say Peter is not in the best of moods... If I was to play the role of Peter the most important thing for me to remember is that he is only seven years old, so all my movements would have to reflect that of a child. Also, Peter should speak with a West Country accent in a slightly higher pitch than an adult voice, to indicate his youth. Scene 13 opens with Peter appearing in his foul mood saying; "I'll get him, I'll bloody get him". ...read more.

I would also make a kicking gesture intentionally in front of Donald to impress him further. Peter knows that if Donald knew the truth about the fight then his 'hard boy' reputation would be in ruins. This is why Peter suddenly becomes paranoid when Donald says "Oh, I expect you beat him really" by anxiously replying; "Wos thou know about it!" I would make this reaction very snappy and raise my voice to a threatening tone. Again, I would move closer to Donald's face and I would grab him forcefully by his clothes to threaten Donald. On the line "Quack! Quack! Quack! Goo on, flap your wings!" I would sarcastically impersonate Donald by flapping my arms like wings in front of Donald hoping to provoke a reaction from him. This gives me a chance to show Peter's immature child like behavior. I would raise my eyebrows and fold my arms to show expectation. When Donald gives into this degrading command, I would laugh at him and walk away to show Peter's disinterest. Peter is constantly toying with Donald's emotions and shows his forgetfulness by completely changing the subject; "There ain't no jam jars in here, is there?" ...read more.

When Peter puts his foot in the fact that the 'japs' have got Donald's dad, you see Peter's softer side come out for a split moment. Donald becomes upset and stage directions indicate that the pain gets through to Peter. To show this I would frown and thoughtfully look at Donald to portray a genuine look of concern for a moment. When saying the line "Hey-listen-we got us a squirrel today!" to cheer up Donald, I would give him a rough pat on the back which would not be gentle or reassuring, but a gesture that I was his friend. Concern, anger, resentment and all other aspects of emotions in this scene should all be played truthfully and ideally in relation to the actions of seven year olds to reflect the age group. Dennis Potter wanted to show how adult fear and aggression is present in children and there is little innocence. If I was to play the role of Peter I believe it is important for the performance not to be overplayed. Emotional memory and drawing on my own experiences in life should help to contribute to playing the role of Peter. Cloe Mann :) ...read more.