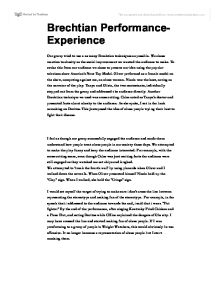 Our group tried to use a as many Brechtian techniques as possible. We chose reaction to obesity as the social improvement we wanted the audience to make. To evoke this from our audience we chose to present our idea using the popular televison show America's Next Top Model. Oliver performed as a female model on the show, competing against me, an obese woman. Nicola was the host, acting as the narrator of the play. Tanya and Olivia, the two contestants, individually stepped out from the group and addressed the audience directly. Another Brechtian technique we used was cross cutting. Chloe acted as Tanya's doctor and presented facts about obesity to the audience. As she spoke, I sat in the back munching on Doritos. This juxtaposed the idea of obese people trying their best to fight their disease. I feel as though our group successfully engaged the audience and made them understand how people treat obese people in our society these days. We attempted to make the play funny and keep the audience interested. ...read more.

We tried to show the two different extremes of characters by singing different songs. Oliver sang the song "I'm beautiful" Acting as the over confident person. I sang "Kentucky Fried Chicken and a Pizza Hut" to show that food was on my mind. The use of the 'Clap' and 'Cringe' placards showed the opinions of people these days. This was an effective way to get the message across and introduce the two difference people competing. We could improve our performance by making it funnier and making the ending stronger. We showed that Oliver won the show but we did not explain the reason. If we had another scene where we addressed the audience directly and told them the reason that skinny woman are more attractive and accepted over obese people, it would be more effective. I really enjoyed the Gay Village performance. The introduction of the characters with Amalissa, Georgia and Charlotte's posing was very funny and we understood their characters really well without them having to say very much. ...read more.

I do not think we had a clear resolution to the problem shown the audience, so whilst they understood that our opinion was gay marriage should be accepted, there was no shown progress given Personally, I think the piece was a success, because of its funny nature and how we employed most techniques. Our physical theatre and stereotypical characters worked well because they were so well planned and easy to follow. However, the narrator role was not filled to the best of our group's ability, and I think in the future more time should have been spent as a group to built the character and its position more. I think basing our story on a fable made our piece very easy to understand and follow for the audience, whilst giving us a model to devise our piece on. The parody made our characters clear, and made bringing the issue into our piece simple The most effective aspects were the physical theatre we employed, because it defined our characters for us, and allowed the sarcastic tone of the piece to have full effect. The issue we chose was also relevant to today, making it have more of an impact. Brechtian Performance- Experience ...read more.