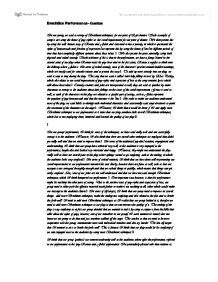 In our group, we used a variety of Brechtian techniques for our piece of Epic theatre. Such examples of using it are using the theme of 'gay rights' as the 'social improvement' for our piece of theatre. We then present this by using the well- known story of Romeo and Juliet and converted it into a parody, in which it questioned the rights of homosexuals and freedom of expression (we represent this by using the theme of love) in different periods of time that have completely different opinions about those ideas. ? We also present the piece satirically, using both physical and verbal comedy. Such evidences of this is that in the performance, we have a funny 'dance' in the second scene of our play when Romeo meets his gay lover and in the first scene, Romeo struggles to climb onto the balcony where Juliet is. In terms of verbal comedy, most of the characters' speeches contain hidden meanings, which are mostly used for comedic reasons and to present the story.? To add up more comedy into our play, we used a song to sing during the play. ...read more.

are flaws as well, such as that our messgae is not conveyed throughly enough and that we rushed things in quickly, which means that things can get easily confused. Also, some of our jokes are not well understood and that we have not used enough Brechtian techniques, which I think hampered our performance. ? One important issue however, is that the performance might be mocking the other parts of society. Due to the sensitive issue of gay rights and expression of love, our group need to either push the offensive material much further or make it not mocking at all, either which would make our message to the audience clearer.? In terms of self targets, I think that our group need to improve on several things: add more Brechtian techniques, make the ending not confusing and also related to the plot and to 'break the forth wall'. I need to add more Brechtian techniques as I realise that our group lacked in it, therefore we need to add more Brechtian techniques to our play so that we can increase the quality of it. The ending of the play is very confusing as at first our group decided that we wanted to end it by using a scripture ...read more.

Overall, I am content with our groups' work and performance. However, there are several alternatives that I might prusued. ? Instead of using the theme of gay rights and acceptance of free love, I could prusue in suing the theme of 'racism' as it would be much easier to fins resources and themes based on that. Hoever, the problem for that alternative is that it might not be as funny as the theme about gays, whom the masses usually preferred to look that things which seems queer to them and not common.? Instead of using the play Romeo and Juliet to parody. We could find more interesting and non- fictional history accounts which actually talks about gay rights more seriously. This is because parodys based upon serious stories are much more funny.? The two aspects of my peers work that I think are brilliant are the group that used 'bullying' in their context and the group that talked about 'acceptance of gay marriage' in their performance. This is because these groups have used the Brechtian techniques more sufficently and that they are much more organised. They also incorportae jokes, dances and other types of media very well, sometimes even 'braking the forth wall'. Brechtian Performance- Gestus ...read more.