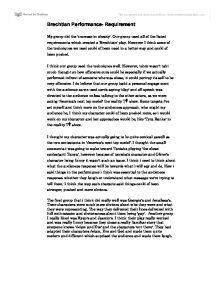 My group did the 'increase in obesity' .Our group used all of the listed requirements which created a 'Brechtian' play. However I think some of the techniques we used could of been used in a better way and could of been pushed. I think our group used the techniques well. However, tehre wasn't taht much thought on how offensive ours could be especially if we actually performed infront of someone who was obese, it could portray its self to be very offensive. I do believe that our group hadd a personal engagement with the audience as we used cards saying 'clap' and all speech was directed to the audience unless talking to the other actors, as we were acting 'America's next top model' the reality TV show. Some targets i've set myself are; think more on the audiences approach, who might my audience be, I think my character could of been pushed more, so i would work on my character and her approaches would be, like 'Tyra Banks' in the reality TV show. ...read more.

Humour was the biggest genre within the play, there was also the use of narrators, individuals, stage directions and projections. Each character has their own representation with their tags; E.g. "Gods". Therefore, the comic techniques were used along with stereotypes. We also used re-run as a way of repetition and clearance to the audience. Music were also used to support our parody acts, dance and moments of still images (geste). By using most of the Brechtian techniques; projections, verfremdungseffekt, geste and music, we were able to communicate well enough with our audience. I thought that our group used the Brechtian techniques well enough for our audience to understand what we were trying to do. There were moments where there was an obvious reaction from the audience, it can be told if they were engaged or even understood our message through their laughter of our parody. However, there were also many moments where we didn't get a reaction we wanted. ...read more.

was no shown progress given Personally, I think the piece was a success, because of its funny nature and how we employed most techniques. Our physical theatre and stereotypical characters worked well because they were so well planned and easy to follow. However, the narrator role was not filled to the best of our group's ability, and I think in the future more time should have been spent as a group to built the character and its position more. I think basing our story on a fable made our piece very easy to understand and follow for the audience, whilst giving us a model to devise our piece on. The parody made our characters clear, and made bringing the issue into our piece simple The most effective aspects were the physical theatre we employed, because it defined our characters for us, and allowed the sarcastic tone of the piece to have full effect. The issue we chose was also relevant to today, making it have more of an impact. Brechtian Performance- Requirement ...read more.