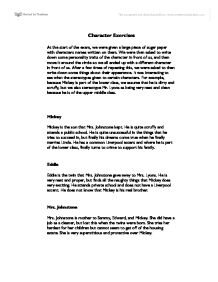 Character Exercises At the start of the exam, we were given a large piece of sugar paper with characters names written on them. We were then asked to write down some personality traits of the character in front of us, and then move it around the circle so we all ended up with a different character in front of us. After a few times of repeating this, we were asked to then write down some things about their appearance. It was interesting to see what the stereotypes given to certain characters. For example, because Mickey is part of the lower class, we assume that he is dirty and scruffy, but we also stereotype Mr. Lyons as being very neat and clean because he is of the upper middle class. Mickey Mickey is the son that Mrs. Johnstone kept. He is quite scruffy and attends a public school. He is quite unsuccessful in the things that he tries to succeed in, but finally his dreams come true when he finally marries Linda. ...read more.

She has a Liverpool accent and lives in council estates. She does get married to Mickey, but is driven away when he becomes addicted to prescription pills. She has an affair with Edward and could be the person to blame for the tragic ending to this play. Sammy Sammy is the rogue of the Johnstone family. He is always up to mischief and doesn't seem to get anywhere in his life. Mickey wishes to be like him at first, but as Sammy gets older he seems to get more and more out of control. Tensions between characters The lines between names represent tension between the characters Mickey Eddie Sammy Linda Mrs. Johnstone Mr. Lyons Mrs. Lyons After completing this exercise, we were then asked to stand at one end of the room and were asked various questions. We then had to go and stand at the name which we felt was the answer for the question. ...read more.

Johnstone into believing in a superstition that she invented herself. This helps her to gain a son. She also makes Mrs. Johnstone swear on the bible, knowing she is superstitious and unable to break her word. Who is the wisest? In my opinion Mrs. Johnstone is the wisest as she has the most life experience. She has had her ups and downs, and has still managed to raise 8 children, pretty much by herself, even when she is unemployed in lower class Liverpool. She may not have the highest intelligence of all the characters, but in my opinion I think she is wiser than everyone else. Who is the most deprived? I personally think that Eddie is the most deprived in the sense of the truth. He has been brought up all his life thinking that Mr. and Mrs. Lyons were his real parents, when actually Mrs. Johnstone is his mother. Although Mickey has been deprived of materialistic things, Eddie has been deprived of his whole family. He has been living a lie his whole life, which is why I think he is the most deprived. Family is more important that material goods. ...read more.