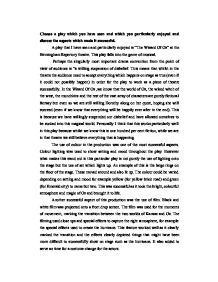 Choose a play which you have seen and which you particularly enjoyed and discuss the aspects which made it successful. &quot;The Wizard Of Oz&quot; at the Birmingham Repertory theatre.

Choose a play which you have seen and which you particularly enjoyed and discuss the aspects which made it successful. A play that I have seen and particularly enjoyed is "The Wizard Of Oz" at the Birmingham Repertory theatre. This play falls into the genre of musical. Perhaps the singularly most important drama convention from the point of view of audience is "a willing suspension of disbelief. This means that whilst in the theatre the audience need to accept everything which happens on stage as true (even if it could not possibly happen) in order for the play to work as a piece of theatre successfully. In the Wizard Of Oz ,we know that the world of Oz, the wiked witch of the west, the munchkins and the rest ...read more.

However what makes this stand out in this particular play is not purely the use of lighting onto the stage but the use of set which lights up. An example of this is the large rings on the floor of the stage. These moved around and also lit up. The colour could be varied depending on setting and mood for example yellow (for yellow brick road) and green (for Emerald city) to name but two. This was successful as it took the bright, colourful atmosphere and magic of Oz and brought it to life. Another successful aspect of this production was the use of film. Black and white film was projected onto a front drop screen. ...read more.

The rings could move round acting as a pathway and travelator for the actors, particularly effective in depicting the yellow brick road. Other objects for example the small houses (for the Kansas scenes) could be attached to the rings and moved around too, creating a good effect for movement, and for the hurricane. The set was at the same time elaborate yet simple and it served to bring the world to life. In conclusion The Wizard Of Oz is an enjoyable and successful play which has encaptured audiences in theatres and cinemas for many years. It is successful because we willingly believe what we see. In the production I saw at the Birmingham Repertory theatre the most successful aspects were: the use of colour to create both mood and setting, the use of film to show transition between the worlds and the use of moving and flexible set. ...read more.