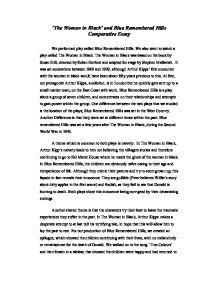 Comparative Essay - the Woman in Black and Blue Remebered Hills

In The Woman in Black this is shown through the ghost of the woman in black 'childishly' taking her anger and hurt at her sons death out on others, by killing the children of those who have encounters with her. In The Woman in Black, the production cleverly builds up suspense creating a very frequent, tense atmosphere; as this was fitting for the genre. Although this is also true for our production of Blue Remembered Hills, in our physical theatre scenes and some uses of music, it is far less evident. The characters in The Woman in Black are almost all adults, whereas in Blue Remembered Hills they are children, although through play-acting, they try to mimic and copy the adults in their lives. A major difference between the two plays was that The Woman in Black was set inside a theatre to - 'a play within a play' - (although other locations like London and the East Coast were referred to) and had two time zones. Blue Remembered Hills was chronological with just one time zone. ...read more.

Therefore the events within The Woman in Black are unrealistic. Throughout our performance of Blue Remembered Hills, there is a continuous theme running through the play. Underneath the innocence and naivety of the children's fun and games, is a sinister undertone, which is mainly exposed at the end of the play, with the death of Donald. The Woman in Black definitely has a very sinister tone as the aim of the play is to scare and frighten, and various deaths occur within the plot. Nevertheless , although both plays do have a sinister tone, The Woman in Black is by far the more haunting of the two; as the style is a traditional ghost story, the aim of the production is to frighten its audience. Although Blue Remembered Hills does have the sinister undertone of child's play, it is far less obviously chilling than The Woman in Black, and is only really expressed at the end of the production. Our production was overall more poignant than it was haunting, as the death of Donald was caused by his friends, who did not mean their actions to be malicious. ...read more.