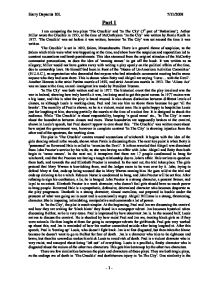 Part 1 I am comparing the two plays 'The Crucible' and 'In The City' (3rd part of 'Barbarians'). Arthur Miller wrote the Crucible in 1953, at the time of McCarthyism. 'In the City' was written by Barrie Keefe in 1977. 'The Crucible' was set before it was written; however 'In The City' was set around the time it was written. 'The Crucible' is set in 1692, Salem, Massachusetts. There is a general theme of suspicion, as the Salem witch trials were what was happening at the time, and show how the suspicion and superstition led to constant accusations and harsh punishments. This idea stemmed from the original stimulus of the McCarthy communist persecutions, as does the idea of 'naming names' to get off the hook. It was written as an allegory; Miller would not have gotten away with writing a play openly on the political affairs of the time, due to censorship laws. He himself had been in front of the 'House of Un-American Activities Committee' (H.U.A.C.), an organisation who demanded that anyone who had attended a communist meeting had to name anyone who they had seen there. This is shown when Betty and Abigail are saying 'I saw... with the Devil'. ...read more.

Abigail Williams is a strong, threatening, character. She is imposing, intimidating, manipulative and commands a lot of power. In 'In the City', the plot is much simpler. At the beginning, Paul and Jan are discussing the carnival and how they are waiting for 'black bints' they found in a newspaper advert. Jan becomes hysterical when discussing Belfast, as he is very tense. Paul is impressed by how observant Jan is. In the second half, Louis arrives to discuss the carnival. He is shocked by how racist Paul and Jan are, treating black girls as if they were animals. He then laughs at them for going to newspaper adverts for girlfriends. Paul gets very worked up about this, and Jan is reminded of how his mother committed suicide after being laughed at. After this speech, Paul is 'beating up' Louis, who doesn't fight back. Jan is at first disgusted, but then takes the blame because he doesn't want to go to Belfast for fear of death. Jan is a character who tries to be righteous and brave, but then his cowardice makes him kick Louis to avoid risk of death. Paul is a violent character who is very racist, and annoyed about being 'left out' of everything. ...read more.

It would almost class as a naturalistic piece, but the only thing that really classifies it as a realistic play instead is the backdrop, as it is only a frame to give the flexible impression of any room. The lighting was all very effective, and there was no 'corner cutting'. The 'fourth wall' was clearly evident, as the characters didn't directly involve the audience. This all led to it being a captivating and believable performance. 'In The City' may be a less convincing performance, scenery-wise. This is due to the limitations of the Drama studio. It is really a stylistic piece, because there are no props at all and little scenery. The only device used is lighting. The general theme of 'In The City' is also fear (of Belfast for Jan), although it begins more light-heartedly. The contrast between the more jolly beginning and the suddenly more sombre ideas beginning to creep through create a tragic effect. In conclusion, these plays are both written differently. They are written for different reasons; 'The Crucible' to show the government as cruel, 'In The City' to show some citizens as being vindictive. The plots are very different, although are both tragic. The characters have some similarities in motive, but their decisions differ. The style of 'The Crucible' is realistic, whereas 'In The City' is stylistic, due to the limitations of the drama studio. Harry Dayantis 10L 7/11/2008 - 1 - ...read more.