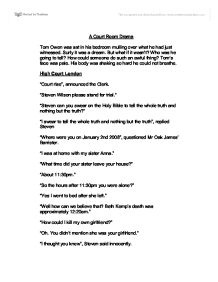 A Court Room Drama Tom Owen was sat in his bedroom mulling over what he had just witnessed. Surly it was a dream. But what if it wasn't? Who was he going to tell? How could someone do such an awful thing? Tom's face was pale. His body was shaking so hard he could not breathe. High Court London "Court rise", announced the Clerk. "Steven Wilson please stand for trial." "Steven can you swear on the Holy Bible to tell the whole truth and nothing but the truth?" "I swear to tell the whole truth and nothing but the truth", replied Steven "Where were you on January 2nd 2008", questioned Mr Oak James' Barrister. "I was at home with my sister Anna." "What time did your sister leave your house?" "About 11:30pm." "So the hours after 11:30pm you were alone?" "Yes I went to bed after she left." "Well how can we believe that? Beth Kemp's death was approximately 12:20am." "How could I kill my own girlfriend?" "Oh. You didn't mention she was your girlfriend." ...read more.

By the time we had finished, it was about 11:30pm. I left at 11:35pm. Then I returned to my house five miles away." "So by the time you got home what time was it?" "About 12:15am." "Did you get on with Beth Kemp?" "Yes we were good friends." "When was the last time you saw Beth?" "On Christmas Day, Steven and Beth came around my house for dinner." "Please be seated.", belted the Judge. James was still in his pyjamas. It was Sunday and the day before James had invited Steven round for a game on his Nintendo Wii. They were getting on quite well which James found strange because Steven had been ignoring him for the last week. James was just about to reach for the cereal box in the cupboard when he found a Pistol, a real gun. He picked it up and inspected it. James had never held a real gun before. A shock of excitement ran through his body. But then it hit him. His dad hated guns so it wasn't his. ...read more.

He knew he was innocent but what will be the outcome of this day. Will he be free to go, or just about to start his life sentence? All he knew was that he did not kill Beth Kemp. "Order, Order." bellowed Judge Barnaby. "Court rise." announced the Clerk. "James Owen, please stand for trial." James stood up. His heart was pounding. His wrists aced from being tied up in handcuffs. "Why don't you just admit you shot Beth Kemp.", suggested Mrs Grace. "You were caught with the gun. The same gun that was used to shoot Beth." boomed Mrs Grace. "I did not shoot Beth. Someone must have planted it." said James sourly. "So you think someone planted it one you?" asked Mrs Grace sarcastically. "No. I found it in my cereal cupboard. Steven came round the day before. He must have planted it." suggested James. "I have evidence." shouted a scared boy. It was Tom Owen. "Order." shouted the Judge. "James, please be seated." said Barnaby. "Would you mind telling me who you are young man?" asked Barnaby/ "I'm Tom Owen. James' brother." answered Tom. "I have evidence to show that Steven shot Beth. It's all here on my phone. ...read more.