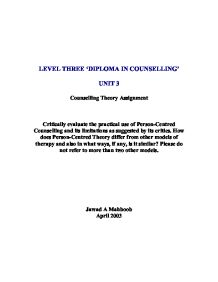 Critically evaluate the practical use of Person-Centred Counselling and its limitations as suggested by its critics. How does Person-Centred Theory differ from other models of therapy and also in what ways, if any, is it similar?

LEVEL THREE 'DIPLOMA IN COUNSELLING' UNIT 3 Counselling Theory Assignment Critically evaluate the practical use of Person-Centred Counselling and its limitations as suggested by its critics. How does Person-Centred Theory differ from other models of therapy and also in what ways, if any, is it similar? Please do not refer to more than two other models. Jawad A Mahboob April 2003 Person-centred, or client-centred, therapy was developed by the American psychologist Carl Rogers who was born in Illinois in 1902. Rogers was a humanistic therapist, unlike the psychodynamic approaches which have their origins in Freudian ideas, including Jung's analytical psychology, Aldler's individual psychology, as well as the therapies of the Neo-Freudian school and the object relations theorists. In the person-centred model of counselling the personality of the counsellor is regarded, as being of paramount importance, for it is impossible, according to Rogers, to separate the personality of the counsellor from the work he does. In order to be effective, he needs to hold certain philosophical beliefs and attitudes which uphold the worth, dignity, significance and value of each individual. A counsellor who pays lip service only to the idea that each person is unique and valuable will, in the end, prove ineffective as a person-centred counsellor since his true inner beliefs will ultimately be transmitted to clients who will then be adversely affected by them. Carl Rogers believed that a truly therapeutic relationship between client and counsellor depended on the existence, within the counsellor, of three important or 'core' conditions, which he referred to as congruence, unconditional positive regard and empathy. Most practitioners, using various models of counselling, would probably claim to value each individual in the way described by Rogers yet very often this is not reflected in the kind of work they do. ...read more.

The concept of the actualising tendency is also important for a much more fundamental reason, and this concerns the idea that if we, as counsellors, believe that people possess a drive towards growth and wholeness, then we must accept them as being intrinsically 'good' and therefore worthy of our deepest respect. An understanding of the self-concept is important in person-centred counselling for it relates to the individuals perception or image of himself which is based on his life experience and the way he sees himself reflected in the attitudes expressed by his family and friends. People acquire their self-concept very early in childhood and it is continually reinforced by ongoing interactions with other people throughout life. For example when an infant begins to interact with his environment, he simultaneously starts to build a picture of himself in relation to it, and if early experiences are bad or negative, then the subsequent development of the self- concept will also be negative. Thus, an individual who has received very little love and a great deal of criticism from parents in early life will, in all probability, grow into adulthood with a poor self-concept. As well as the self-concept, each individual also possesses, according to Rogers, an 'organismic self' which is essentially the real inner life of the person. This organismic self is present from birth and consists of the basic force, which regulates each person's physiological and psychological growth. The desire for deeper awareness of self is very strong, according to Rogers. This is one of the reasons it is important for person-centred counsellors to receive personal counselling to achieve continuous self-development and to be able to demonstrate they have worked on themselves and therefore are prepared to work with clients. ...read more.

One technique used in Gestalt therapy is the 'empty chair' which can prove very powerful and effective, for example a client can re-enact two elements of a dream or a client may have some unfinished matter with a dead person and can use the empty chair to pretend he is talking to the person. These skills must be instigated with a great deal of thought and expertise on the part of the counsellor This means in effect, that the Gestalt counsellor or a counsellor who chooses to use Gestalt intervention should be adequately trained in the skills which underpin the model (i.e. the skills of listening, observing and responding when appropriate) As well as Gestalt techniques proving effective, they can be damaging if not used appropriately or with adequate skills. It is imperative the counsellor is aware of and takes ownership of the dangers of using inappropriate techniques. A person-centred counsellor working with the client and using the core conditions can do little damage to the client's frame of mind. As illustrated above techniques used from other models can be very effective and powerful in the development of counselling sessions but these must only be used when appropriate for the client and when the client is ready. Counsellors can often make the mistake of using techniques because they feel it is appropriate and beneficial in the session and forget whom they are actually doing it for, themselves? Or the client? All the theories explored are valuable and have an appropriate place within a counselling situation. It is the responsibility of the counsellor to only use intervention of techniques when it is safe to do so and the client is ready, and this can be established by developing a relationship with the 'core' conditions outlined in the person-centred theory. ...read more.