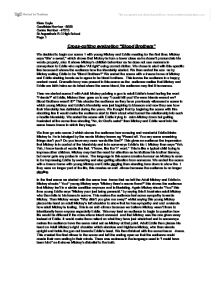 Cross-cutting evaluation "Blood Brothers" We decided to begin our scene 1 with young Mickey and Eddie meeting for the first time. Mickey says "Gis' a sweet," which shows that Mickey is from a lower class as he doesn't pronunciate his words properly, also it shows Mickey's childish behaviour as he does not use manners in comaprison to Eddie who replies "All right" using correct diction. We chose to start with this specific line because it shows the audience how the friendship started. We then ended the scene by Mickey asking Eddie to be "Blood Brothers?" We ended the scene with a freeze frame of Mickey and Eddie shaking hands as to agree to be blood brothers. This leaves the audience in a happy, content mood. Dramatic irony was present in this scene as the audience realise that Mickey and Eddie are birth twins so do infact share the same blood, the audience may find it humerous. ...read more.

We then go onto scene 3 which shows the audience how amazing and wonderful Eddie thinks Mickey is. He is intruiged by the words Mickey knows eg "Pissed off. You say some smashing things don't you? Do you know any more words like that?" This gives an audience the impression that Mickey is in control of the friendship and is in someways Eddie's idol. Mickey then says "Yeh. Yeh, I know loads of words like that. Y'know, like the 'F' word." This is like a typical child trying to impress other children. Mickey may feel the need for attention as he idolizes his brother Sammy, but never gets any praise in return. The language in this scene creates humour as Mickey is seen to be impressing Eddie by swearing and also getting attention from someone. We ended the scene with a freeze frame with young Mickey and Eddie giggling then standing face down to show that they were no longer part of the life, this creates an anti-climax because the audience is no longer giggling. ...read more.

This may lead an audience to begin to question how life would be different if the roles where infact reversed and that Mickey was the one given away instead of Eddie. It would make them reflect on what they have just whatched and in someways makes the audience have the same mind set as Mickey at that point. Adult Eddie then places his hand on Adult Mickey's right shoulder which shockes and frightens Mickey, who then stands upright and holds the gun out towards Eddie's head. We then finished with the same freeze-frame. This created the final climax to the scene and left the ending open so that the audience could create their own ending in their minds. There was sadness in the language used in "I could have been him!" as it shows Mickey's disbelief to the truth. Kiera Coyle Candidate Number - 8058 Centre Number - 47213 St Augustine's R.C High School Page 1 Kiera Coyle Candidate Number - 8058 Centre Number - 47213 St Augustine's R.C High School Page 1 ...read more.