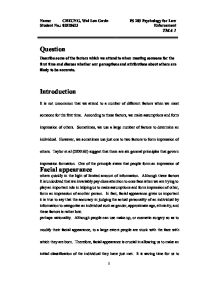 Describe some of the factors which we attend to when meeting someone for the first time and discuss whether our perceptions and attributions about others are likely to be accurate.

Question Describe some of the factors which we attend to when meeting someone for the first time and discuss whether our perceptions and attributions about others are likely to be accurate. Introduction It is not uncommon that we attend to a number of different factors when we meet someone for the first time. According to these factors, we make assumptions and form impression of others. Sometimes, we use a large number of factors to determine an individual. However, we sometimes use just one to two factors to form impression of others. Taylor et al (2000:63) suggest that there are six general principles that govern impression formation. One of the principle states that people form an impression of others quickly in the light of limited amount of information. Although these factors play an important role in helping us to make assumptions and form impression of other, it is true to say that the accuracy in judging the actual personality of an individual by these factors is rather low. Facial appearance It is undoubted that we invariably pay close attention to ones face when we are trying to form an impression of another person. ...read more.

Nowadays, colour-dyed hair becomes a prevailing trend among all people in Hong Kong. Voice Voice can convey meaningful message about each individual's personality and background about their politeness, education level and intelligence. Impression can be formed in the light of softness or hardness of a person's voice, the intonation and the speed with which they speak. A person who speaks rapidly may be perceived to be of a nervous disposition while a person who speaks in a slower, more deliberate voice may be perceived to be confident and assured. Riggio and Friedman suggest that "individuals who are skilled communicators of posed emotions tend to be more successful deceivers." In this case, person who has a voice with self-confidence and fluent verbalism may play an important role in some deception task. Some of person who is attracted by such voice performs some abnormal behavior. For instance, teenager easily influences by some gangster through their speech on how heroic they confront with police or the other. Afterwards such influenced teenagers will be mind controlled by gangster to commit illegal activities. On the other hand, we can say that the reason of teenager joining the gangster is that such teenager needs more protection from gangster and stand out effectively among the others. ...read more.

For example, salespeople may be more practiced or experienced at telling similar lies by using social skills. Social skills have an ability to influence people final decision effectively. Attribution Another important aspect of the perception of others is concerned with how we attribute a cause to an individual's bebaviour and how we try to understand the motives behind an individual's actions. For example, a police officer may attribute a speeding driver as a bad person because he likes to do that. This is so call the internal attribution. On the other, the driver speeds up his car maybe due to hurrying to a hospital to visit his mother who is in critical situation, that is, external attribution. Different attribution gives us different perception of others. Conclusion Through our observation of others' facial appearance, physique, hair style, clothing, voice and other non-verbal communication factors, we may now have a brief idea on one's education level and even one's personalities. We should also be reminded that we have a tendency to use stereotypes and prejudice in adjusting a person. Therefore, if we are trying to criticize a person who meets at the first, please stop and think deeply whether we have such stereotypes and prejudices. Name: CHEUNG, Wai Lun Gavin Student No.: 03528623 PS 203 Psychology for Law Enforcement TMA 1 1 ...read more.