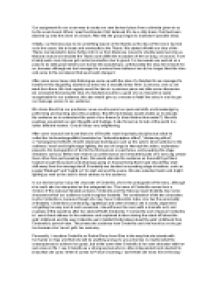 Devised piece coursework. When I saw the stimulus I first believed it to be a dirty dress, that had been washed up onto the shore of a beach

﻿Our assignment for our exam was to create our own devised piece from a stimulus given to us by the exam board. When I saw the stimulus I first believed it to be a dirty dress, that had been washed up onto the shore of a beach. After this the group began to brainstorm possible ideas. Initially, our first idea was to do something based on the titantic as the idea of the shore had led us to the ocean, the to boats and eventually to the Titanic. We started off with our idea of the Titanic, but decided to delve further into it, so from titanic we moved to shoddy workman ship as that was reason we decided the Titanic sunk (With the exception of the ice burg, of course). From shoddy work man ship we got rushed production due to greed. For two weeks we worked on a peice to do with greed which soon turned into sweatshops, unfortunately the idea did not work for us, because although we had managed to produce three tableaux' we did no longer liked the idea and came to the conclusion that we should change it. After some more heavy duty thinking we came up with the idea of a fairytale for we managed to transform this disgusting, washed up dress into a beautiful dress fit for a princess, and so, we went from there. ...read more.

no matter what the consequences to achieve her goals, but at the same time Cinderilla is her own character with her own view on life. I see Cinderilla as a strong woman who is rather independant and reluctant to show that she cares. When it comes to Prince Charming, I don't think she loves him in the way she claims to, I think it was a crush that became into something her sister had that she wanted. It was more a competition than anything else in Cinderilla's eyes. To explore my character in further depth and to properly develop her in the best way possible, I used various rehearsal techniques. we frequently used tag improv, by putting our charcters in certain situations and dealing with them in the way we believed our character would. We used physicalisation techniques, such as kumala vista, which we did using the voice of our characters. Hot seating was another, as was emotion memory. I think the rehearsal techniques worked well as they allowed me to develop my character and see things from her perspective. Over the course of the rehearsal period Cinderilla changed slightly, because originally Cinderilla appeared incabpable of any emotion but now she show that she has a softer side to her, in that at first her feelings for Prince Charming are genuine and even towards the end of the story she gives of the feel that maybe she does love him and she's not just some demented fool. ...read more.

As a whole group, I think we did well. We worked together and made sure everyone knew there lines and if one person messed up the other would continue and just go for it as if it was part of the scene. On my induvidual performance, I think I too did well. I tried hard to convey Cinderilla's character the in the way I saw her. The worst part was the entire time we were performing, although I was focusing on the task at hand, I found my mind constantly worrying about wether or not our message was clear enough. In relation to Brecht, I think our performance was quite effective in regards to our message - Is blood thicker than water? Our techniques I thought were well rehearsed. I had some difficulty talking in the third person as although I found it easy to talk as the character I found it hard to talk as the actor about the character and how the character was feeling during the scene. If I were to do the exam again, I probably would not use Brecht because although it was a very interesting and educating experience to use Brecht as our practioner as I found it difficult to incorperate Brecht into our devised piece. ...read more.