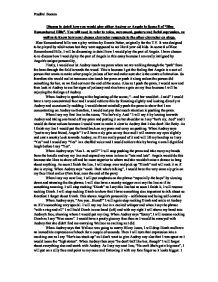 Discuss in detail how you would play either Audrey or Angela in Scene 8 of Blue Remembered Hills. You will need to refer to voice, movement, gesture and facial expression, as well as to know how your chosen character responds to the other ch

Discuss in detail how you would play either Audrey or Angela in Scene 8 of "Blue Remembered Hills". You will need to refer to voice, movement, gesture and facial expression, as well as to know how your chosen character responds to the other character on stage. Blue Remembered hills was a play written by Dennis Potter, originally for the T.V. It was designed to be played by adult actors but they were supposed to act like 8 year old kids. In scene 8 of Blue Remembered Hills, I will be discussing in detail how I would play the part of Angela. I have chosen to to discuss how I would play the part of Angela in this essay because I am really intrigued by Angela's unique personality, Firstly, I would not let Audrey touch my pram when we are walking through the "path" from the barn through the field towards the wood. This is because I get the feeling that Angela is a sort of person that wants to make other people jealous of her and make sure she is the centre of attraction. ...read more.

When Audrey says "Am I...as well?" I will stop pushing the pram and take away my hands from the handle and say my line and expand my arms in time to "lots and lots". Angela would do this because she likes to show off and be more superior to others and she wouldn't miss a chance to brag about anything. As soon I finish the line, I will stoop over and pick up "Dinah" and will rock it as if she is crying. When Audrey says "oooh. Hark who's talking", I would have the very same sly grin on my face I had earlier (Para four, near the end of the para) When I say my next line, I will put emphasis on the phrase "especially the boys" by slowing down and stressing the the phrase. I will also have a sneaky snigger as ai say the line as if its something amazing. I will stop rocking "Dinah" as I say this line but as soon I finish it, I will resume rocking Dinah. ...read more.