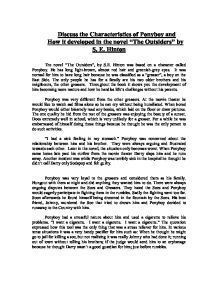 Discuss the Characteristics of Ponyboy and How it developed in the novel "The Outsiders" by S. E. Hinton The novel "The Outsiders", by S.E. Hinton was based on a character called Ponyboy. He has long light-brown, almost red hair and greenish-grey eyes. It was normal for him to have long hair because he was classified as a "greaser", a boy on the East Side. The only people he has for a family are his two older brothers and his neighbours, the other greasers. Throughout the book it shows you the development of him becoming more mature and how he handles life's challenges without his parents. Ponyboy was very different from the other greasers. ...read more.

Another incident was while Ponyboy was terribly sick in the hospital he thought he didn't call Darry only Sodapop and felt guilty. Ponyboy was very loyal to the greasers and considered them as his family. Hungout with them at night and did anything they wanted him to do. There were always ongoing disputes between the Socs and Greasers. They hated the Socs and Ponyboy would eagerly participate in fighting them in the rumbles. Sadly the fighting went too far. Soon afterwards he found himself being drowned in the fountain by the Socs. His best friend, Johnny, murdered the Soc that tried to drown him and Ponyboy decided to runaway to the Country with him. ...read more.

"You read about people looking peacefully asleep when they're dead, but they don't Johnny just looked dead. Like a candle with the flame gone." This quotation describes how sad Ponyboy was about the appearance of Johnny's dead body. He denied and convinced himself that Johnny wasn't even dead. Later, Ponyboy had to face reality and realize Johnny was gone forever. Ponyboy was given a book with an unexpected note., "Gone with the Wind" from Johnny after he died. This note, which Ponyboy received, made him think about life and the book made him think about Johnny. Ponyboy finally feels grateful. At the end of the novel, he becomes a better person and appreciates what he has. He realizes not everyone has a family like he does, which looks after him and takes care of him. Also learns its better to enjoy life and Life is too short to complain! ...read more.