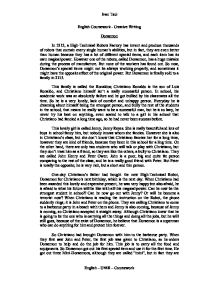 English Coursework - Creative Writing Doraemon In 2112, a High-Technical Robots Factory has invent and produce thousands of robots that contain every single human's abilities, but in fact, they are even better than human because they has a lot of different special items, and each item has its own magical power. However one of the robots, called Doraemon, has a huge mistake during the process of manufacture. But none of the workers has found out. So now, Doraemon's special items might not be always working properly, and sometimes it might have the opposite effect of the original power. But Doraemon is finally sold to a family in 2115. This family is called the Ronaldos; Christiano Ronaldo is the son of Luis Ronaldo, and Christiano himself isn't a really successful person. In school, his academic work was an absolutely failure and he got bullied by his classmates all the time. So he is a very lonely, lack of comfort and unhappy person. Everyday he is dreaming about himself being the strongest person, and bully the rest of the students in the school, that means he really want to be a successful man, but he is so lazy, he never try his best on anything, even scared to talk to a girl in his school that Christiano had fancied a long time ago, so he had never been success before. ...read more.

This job is to carry all the food and equipments. So Doraemon got out his first special item and use it for the first time. He got out three Mini-Doraemons, although they are called "mini", but in fact they are huge and strong. So these three Mini-Doraemons had carried everything for Christiano. When Christiano saw this power, he was really surprise. He cannot believe how amazing Doraemon is. So he asked Doraemon: "What else can you do?" "Anything!" When Doraemon answered back, Christmas shouted: "Okay then, can u produce two thousand dollars for me?" There was a dead silence. Christiano can see some writings rolling so fast in Doraemon's eyes. It is because Doraemon was readying the rules of using the special items, and one of the rules was "Cannot reproduce money or valuable products for your master." So Doraemon refuse to do it. Christiano was in stress when Doraemon refused. So they carry on walking to the beach, and the three Mini-Doraemons had been sweating like humans, but Christiano can see it from their eyes that they still don't want a rest yet. Their muscles are as hard as piles of wood stuck together. When they arrived, Doraemon have given them a signal, and then the three Mini-Doraemons had suddenly disappeared. The food and equipment had dropped and most of the food had landed on a dirty and sandy floor. ...read more.

Christiano cannot believe it, so he swim back to Doraemon and feeling very upset. He then told Doraemon what had happen but Doraemon haven't got a clue why his item not working. It is because the mistake during the process of making Doraemon, his items started not to work properly now. So he cannot help Christiano right now and Jenny is now doesn't seem to be like him. It was nobody's fault, but Christiano feels it is all Doraemon's fault, he feels that Doraemon gave him the wrong item in purpose, so he starts crying again: "Doraemon! Help!" However this time Doraemon doesn't seem to help him, because he knew himself need to be repair otherwise his special items will be totally wrong. So he said to Christiano: "Christiano, sometimes you need to do it yourself, I can't help you forever. So why don't you use your own power to get Jenny back." "But...but..." "Christiano, you need to try it, you can't rely to other people forever." So Christiano got out his guts, and walk up to Jenny: "Jenny, are u okay?" "No, go away." "I am so sorry, I didn't mean to do that." "Because I love you, I will not do anything to hurt you!" After Jenny heard that, the magical power from the spray seems to be away. And she does also like Christiano, so them two become a pair and started a different life in the beach. Ivan Tsui English - U44R - Coursework ...read more.