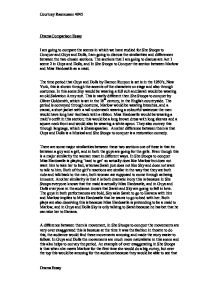 Drama Comparison Essay I am going to compare the scenes in which we have studied for She Stoops to Conquer and Guys and Dolls, I am going to discuss the similarities and differences between the two chosen sections. The sections that I am going to discuss are Act 1 scene 2 in Guys and Dolls, and In She Stoops to Conquer the section between Marlow and Miss Hardcastle as a maid. The time period that Guys and Dolls by Damon Runyon is set is in the 1950's, New York, this is shown through the accents of the characters on stage and also through costumes. In this scene Sky would be wearing a full suit and Sarah would be wearing an old Salvation Army suit. This is vastly different then She Stoops to conquer by Oliver Goldsmith, which is set in the 18th century, in the English countryside. The period is conveyed through costume, Marlow would be wearing breeches, and a cravat, a short jacket with a tail underneath wearing a colourful waistcoat the men would have long hair tied back with a ribbon. ...read more.

A difference between them is movement, in She Stoops to conquer the movements are very over exaggerated this is because at the time it was the fashion in theatre to do this, the audience would find these movements amusing and made the story easier to follow. In Guys and Dolls the movements are much more naturalistic in this scene and this also helps to convey the period. An example of over exaggerating in She Stoops is that when she meets Marlow for the first time she would do a big curtsy, but over the top this would be amusing for the audience because they would be able to see that she was trying too hard to act like a maid. A similarity between them too is that they both use the whole stage this is because in She Stoops the large movements make the actors use more space and in Guys and Dolls the actors use a lot of space because Sarah is almost trying to get away from Sky. ...read more.

The Music in Guys and Dolls is similar in the way that it tells a part of the story, in She Stoops when we acted out when the music came on we would do movement to what would be happening next. The emotional impact of She Stoops is that the audience find it very amusing and there is tension because the audience do not know weather Miss Hardcastle will pull it off. In Guys and Dolls the audience find it funny because Sky is so persistent and will not take no for an answer this is similar because for both the audiences reaction should be to find it funny. In Conclusion I think that they are very similar and different in lots of ways they both have similar ideas about a boy trying to get a girl, but the way in which the girls react is different. The way in which I would set out each of the sections would be completely different because of the time period and the intensity of the characters. Overall they both use different techniques to show that they are different e.g. making gestures big. Courtney Rasmussen 4045 Drama Essay ...read more.