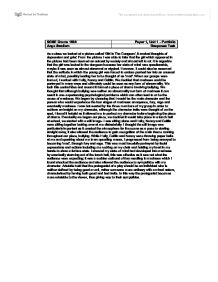 GCSE Drama 1699 Paper 1, Unit 1 - Portfolio Anya Sweilam Response Task As a class we looked at a picture called 'Girl In The Dungeon', it evoked thoughts of depression and grief. From the picture I was able to infer that the girl which appeared in the picture had been deemed an outcast by society and almost left to rot. It is arguable that the girl was locked in the dungeon because her state of mind was questionable, maybe it was seen as almost abnormal or atypical. However, it could also be assumed that the solitude in which the young girl was forced to endure pushed her into an unusual state of mind, possibly leading her to be thought of as 'mad'. When our groups were formed, I worked with Holly, Nancy and Caitlin. We decided that madness could be portrayed in many ways and ultimately could be seen as any form of abnormality. We took this central idea and around it formed a piece of drama involving bullying. We thought that although bullying was neither an abnormality nor form of madness it can result in one experiencing psychological problems which can often lead to or be the cause of madness. We began by choosing that I would be the main character and the person who would experience the four stages of madness: annoyance, fury, rage and eventually madness. I was hot-seated by the three members of my group in order to achieve an insight on my character, although the character traits were thought of on the spot, I found it helpful as it allowed me to perfect my character before beginning the piece of drama. Eventually we began our piece, we decided it would take place in a lunch hall at school, we started with a still image- I was sitting alone and Holly, Nancy and Caitlin were sitting together looking over at me distastefully. ...read more.

We thought the lyrics implied someone being trapped within their own mind, and decided to portray these through narration and a series of still images; the still images, we thought, portrayed an encapsulated figure. Our first still image used four chairs in a circle, back to back, we each sat on one and recited 'people talking without speaking, people hearing without listening'. The chairs in a circle implied we were all connected, yet the fact they were back to back undermined this, showing none of us were interested in another's problem but our own. The second still image was formed with the lines 'hear my words that I might teach you; take my arms that I might reach you'. These were said by Omar and Ali who had their left hand on mine and Katie's right shoulder as we walked away. Our third and final image consisted of Katie and I curled up in a ball with Omar and Ali standing with their back to us, Katie and I screamed 'no one dare disturb the sound of silence'. This showed people who may suffer from and unusual state of mind, such as madness, are in denial and do not seek help. Ali and Omar, once again, played the roles of our conscience- trying to help our us but being rejected and pushed to not caring. In another workshop we identified how social forces can influence individual psychological and physiological states. Each pupil were handed a folded piece of paper, all were blank except one which had a black spot on it. We had to decide who had the black spot by watching each other's different body language and reactions, ask each other questions and evaluate who was being particularly evasive or behaving differently. I thought this resulted in improved group awareness and concentration, with one individual taking responsibility for keeping the activity going by using effective physical performance skills. ...read more.

One of the key moments of the workshop was the lesson where we looked at 'The Scream'. From this I learnt a significant amount about not only drama, but drama portrayed though art. From one painting, so many connotations can be drawn and applied to drama. What I noticed first about this painting is the normality of everything else besides the man screaming, it can be seen as a sort of inner scream we all feel sometimes when an agony that we must keep silent becomes unbearable. Unless we are insane, we keep the resulting desire to scream in despair and fear inside- we are torn apart inside while outside everything goes on as normal. This painting captures both the inner scream and the normality around us. From this I learnt that people may be drawn to 'madness' or 'depression' because they have no one to confront, and open up to- their 'inner scream' may drive them insane. I thought this central idea was most forcefully portrayed by Huguette's group. They portrayed their inner scream and confusion through a simple but impressionable concept. The four members of the group, Jake, Lucy, Honor and Huguette, were sitting in a circle. They took it in turns to speak as they went around the circle, they all seemed to talk to each other, but did not communicate as each character was interested in their own problems- and only their problems. The scene was drawn to a stark ending when all four characters shouted 'ARE YOU LISTENING TO ME?', this stood as a symbol of their inner scream revealing itself. This was my favourite and most memorable part of their piece as it was extremely powerful and summed up everything we had previously studied from 'The Scream' to 'Cagebirds', drawing links between all the drama texts we had studied, this is what really sticks out in my mind and was one of the most powerful workshops. ...read more.