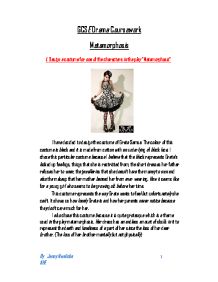 Drama coursework based on the play &quot;Metamorphosis&quot;. Costume and personal performance.

GCSE Drama Coursework Metamorphosis 1. Design a costume for one of the characters in the play "Metamorphosis" I have decided to design the costume of Greta Samsa. The colour of this costume is black and it is made from cotton with an underlying of black lace. I chose this particular costume because I believe that the black represents Greta's locked up feelings, things that she is restricted from; the short dresses her father refuses her to wear, the jewelleries that she doesn't have the money to own and also the makeup that her mother banned her from ever wearing. How it seems like for a young girl who seems to be growing old before her time. This costume represents the way Greta wants to feel but unfortunately she can't. It shows us how lonely Greta is and how her parents never notice because they don't care much for her. I also chose this costume because it is quite grotesque which is a theme used in the play metamorphosis. Her dress has an endless amount of skulls in it to represent the death and loneliness of a part of her since the loss of her dear brother. (The loss of her brother mentally but not physically) 2. Write a diary for a chosen character from 'Metamorphosis' Extract of the last few entries in the dairy of Greta Samsa Tuesday 21st April 1987 Gregor came home later than usual today, I can't help but think the amount of worry and stress shown on his face was triple its usual dose. ...read more.

His costume is also a black waistcoat, white T-shirt with black trousers with the exception of his being torn to tatters. As the light is brighter, it reveals to the audience that the set is completely empty excluding Mr.Samsa, his son and two pictures one of Mr.Samsa and his wife, the other of Mr.Samsa his wife and a young Gregor and Greta - this picture should remind the audience that they were once a happy family. The distance both of them have between each other and the space around them indicates that Mr.Samsa and Gregor's relationship is deteriorating. Mr.Samsa finally directs his attention to Gregor who seems to have notice him and crawled slowly over to his father. The audience should recognise that the status in this scene and also throughout this performance shows that Mr. Samsa has the hierarchy position. Gregor's hands are outstretch as he reaches his father, the pain in the eyes seems to almost be replaced by relief as he uttered the cry "Help me father... help me!" Mr.Samsa - who had seemed to be frozen due to the horror he had just -witnessed stutters and tries to moves back in shock but appears to have stumbled over an imaginary piece of wood. The ominous music volume is lower and then at a snail's pace (almost as though in slow motion) he picks up the "wood" and whilst exclaiming "YOU'RE A MONSTER! ...read more.

The character that I believe caught my attention the most was Nabs because the actor who played him displayed so many emotions for one character. He didn't just act with his body language, his facial expressions and tone of voice really evoked the viewer's imaginations and brought the play to life. A particular example that comes straight to mind is when Nabil spoke of the first time Neela wrote him a note and told him to ask her out, he could remember each world perfectly and used her accents and her body language to demonstrate what it was like for the audience. The viewers could easily understand that he was fund of her, he could remember every little detail about her and judging by his excellent facial expression of happiness, we could also get that he was very much in love with her. His tone of voice was so impeccably perfect that they expressed each emotion beautifully; they seem to be in sync with his body language as that also articulates his emotions. The play was very well thought of and does not lack much but if I was to improve it, I would improve the lighting and make it that whenever someone was doing a monologue, the light would be dim for the other two characters but focused on the main person thought-tracking. ?? ?? ?? ?? By Jenny Nwalioba 1 11HE ...read more.