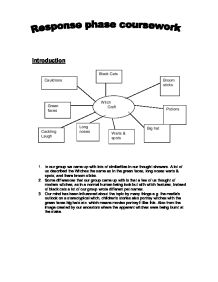 Macbeth extract: focusing on the ‘outsider’

This role-play brought about issues such as how society today fears outsiders. How society today is divided into different groups, such as Goths / punks / gangster and take different paths in life. We fear the outsiders of society because we fail to understand the logic behind their culture / background. This also brings about racism / religion clashes. In the olden days most of the fear was based around witches because they were conveyed as the biggest outsiders.

The storyline of our role-play was about a gothic boy who was feared & isolated from family & school because of being a Goth. We started the role play with Steven (the gothic boy) being in a school photo where is he is isolated from the rest of the school and then we went into his home life where his parents & siblings make jokes about his appearance and his way of life. We ended the play with a twist, where Steven was with all his gothic friends and his little brother (Aaron Tovee) walks past Steven and his group of gothic friends and is mocked for being what society would call “normal” and he is then conveyed as the outsider.

We showed isolation in this play from the very first scene. In the first scene we had school photos were Steven (the outsider) was separated a foot away from the rest of the school that were huddled together for the photo. We portrayed an even bigger sense of frustration & isolation by this when the photographer asks Steven to step in the photo and the group moves away from him. The photographer blames Steven and again snaps at Steven to move into the photo. We did this to show how normal society blames the outsider, as if it was just easier to do so. We also showed isolation at the dinner table of Stevens’s family-home. We showed this by having all his siblings laugh and snigger at him and make comments like “drink blood” because of his gothic background. We ended that scene with Stevens father shouting at Steven telling him he’s not welcome in the home for kicking his sibling under the table (for making the comments) and telling him to get out and hang around with ‘his own kind.’ This made the whole idea of isolation seem a lot more effective because even his father, he whom he should be very close with, kicks him out of the house belting abuse at the top of his voice just because he is a Goth.

We also ended our role-play with a twist on the sense of isolation where Steven is with a group of his Goth friends when his little brother walks past and his little brother feels isolated and afraid because he is the outsider there.

Some similarities of ideas that we had on the idea of witchcraft from this stimuli went along the lines of how accusations were so quickly thrown around in the courtroom, and how everyone believed someone who was called a witch. Most people also thought that it was a fairly racist time and that’s why if you was black like the maid in the stimuli the blame was easily put on you. Some differences on the stimuli were about how the accused always showed a sense of fear. How society was so gullible and why the lies were started.

In our role play we showed the accusation by the same sort of scene as the stimuli. We had it set in a court-room in the olden times whereas the judge’s verdict was the final, and punishment was death / something incorporating pain. We built hysteria in our role-play by levelling up the amount of volume in the courtroom until it was mayhem and chaos with everyone throwing accusations of being a witch to the accused.

We marked the moment where the defence is getting shouted at and abused really badly and she gets up and accuses a man from the courtroom audience. We did this by building up the hysteria with everyone standing up shocked, and built up amount of noise slowly to a really loud volume and then when she got up and said “It’s him!” we silenced the courtroom immediately so it was just a big awkward silence.

Studying this stimulus helped us understand the context at the time because it showed how gullible society was at that time period. An example of this is the fact that everyone believed that a person was a witch just by someone else’s word. The stimulus also shows that there was a big thing about racism in that time. An example of this is where the black woman was blamed for being the witch and beat brutally, the accusation was easily accepted by society because of the colour of her skin.

Our class used forum theatre through studying a news article about a woman sacrificing her two babies to Satan. We then used this as a stimulus and did a whole-class courtroom drama, where we would switch places (defence, prosecution, judge, witnesses etc)

This was useful to use because it made you think on the spot about the subject and it also improved your improvisation skills.

Using the court-room drama attached with forum theatre was very useful because reading about just the sacrifice gave you a biased opinion about what really happened. But when we used the courtroom drama we had to act as defence as well so you started thinking about both sides of the story, and maybe reasons for why they did it. When playing the witnesses it also opened up that it might not just affect the family it could also affect other people around too.

My understanding of the topic has developed through studying the different stimuli a lot because you start to realise that witchcraft isn’t all fairytales and children’s books. It can be portrayed through children’s theatre, but also relate to serious events such as when the babies were sacrificed by the mother to Satan and such.

Studying the different stimuli in different times and cultures developed our

Understanding a lot too because you can see that not along ago was it that people            actually were killed for being accused of witches, and everything was done through religion, and people believed in God strongly. You can see that science has developed through the ages and changed the thoughts of people today drastically through things such as the theory of evolution, which puts people in 2 minds about the creation of mankind, and even questions religion. Therefore people aren’t willing to believe things like witchcraft anymore as it has become abnormal for us to comprehend supernatural things.