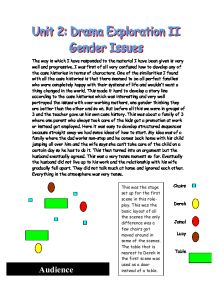 The way in which I have responded to the material I have been given is very well and progressive. I was first of all very confused how to develop any of the case histories in terms of characters. One of the similarities I found with all the case histories is that there seemed to be all perfect families who were completely happy with their systems of life and wouldn't want a thing changed in the world. This made it hard to develop a story line according to the case histories which was interesting and very well portrayed the issues with over working mothers, one gender thinking they are better than the other and so on. But before all this we were in groups of 3 and the teacher gave us his own case history. This was about a family of 3 where one parent who always took care of the kids got a promotion at work or instead got employed. Here it was easy to develop structured sequences because straight away we had some ideas of how to start. My idea was of a family where the dad works non-stop and he comes back home with his child jumping all over him and the wife says she can't take care of the child on a certain day so he has to do it. This then turned into an argument but the husband eventually agreed. This was a very tense moment so far. Eventually the husband did not live up to his work and the relationship with his wife gradually fell apart. They did not talk much at home and ignored each other. Everything in the atmosphere was very tense. Chairs Derek Jamal Lucy Table Before that I had to deal with a situation where the husband got a promotion at work but the wife didn't want him to take it because it would mean he wouldn't have time to take care of the kids and she would get inconvenienced with her job. ...read more.

males think there are certain rules to how men and women should live together. The style of the play is a comedy with a powerful message behind it. Ayckbourn portrays the characters all in very different ways. Lucy: She is portrayed as someone who treats everyone like children, because she is in the house all day looking after her three children. "Nicholas! Stay in your own bed and leave Sarah alone." She is a homemaker. She doesn't socialise a lot this is probably why she talks to people as children. "Blooming kids honestly." Lucy says this towards Rosemary and Terry as they leave her house after arguing. This shows Ayckbourn definitely wants to show her immaturely. We can tell that she is isolated in her own home. She is becoming mentally unstable. She is difficult to relate to. "Well, that's all. No more after that." This is a quote to tell us that she is hard to relate to. Ayckbourn on the other hand portrays Rosemary as a married woman. She acts like a child when Lucy treats her like one. I can tell this because in the text it says "I like orange juice." Rosemary is a caring neighbour because she has gone round to tell her about the phone call, but she also asks her how she is. She is also judges people a lot. Because when Terry comes round she says that she is odd. "I want you to meet her ... I don't think she's well." She has a happy marriage but her and Terry argue in front of Lucy. "He just takes anything he wants!" This says that Terry bosses her around and his rules go. She also seems to be shown as a very weak person. Who never stands up for herself especially against Terry. Terry is a worker, who is thinks very sexist like. He says because he is married this means that he works and Rosemary stays at home and runs the house. ...read more.

We all sat down in class on chairs in our own space. When sir witched off the light he gave us a scenario to think of and say significant thoughts the person in that scenario would be thinking. When he said go we started. Anyone could say something and at any time. People could also interrupt each other. We performed Forum-theatre and sir chose a couple of people to act out various scenes he told them. I had to improvise a scene about a husband and his wife getting angry at each other because the wife's life is so boring. The husband wanted more for the wife. At one point I had to go ballistic at the wife and then leave the room. We also used image theatre to express various emotions of a family which we made a role-play about. All these techniques were very effective in their own way and helped me to understand the play very well. Hot-seating- Helped me understand deeper about the character's personality Still images- Helped me gradually build up role plays Thought-tracking- Helped me improvise my role-play Narrating- Helped me and the audience understand my role-play Role-play- Put all my ideas together and techniques together and displayed them Forum-theatre- Helped me work under pressure and come up with ideas quickly when improvising Marking the moment- Helped me build up my role-plays gradually The sitting chair technique- Helped me understand other people's views on certain situations. I reckon my stagecraft was very good. I made all my sets very lively and made sure they didn't look simple and boring. The problems I had to deal with were few. I had to deal with when the teacher wasn't there for a few lessons. I overcame this by being more independent and trying bold ideas. I had to overcome problems with group members not being there. I overcame this by getting rid of their characters and improvising something without them. I lastly had to overcome the problem with time. I overcame this by in groups doing more acting than discussing. ...read more.