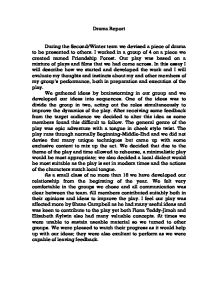 Drama Report During the Second/Winter term we devised a piece of drama to be presented to others. I worked in a group of 4 on a piece we created named Friendship Forest. Our play was based on a mixture of plays and films that we had come across. In this essay I will describe how we started and developed the work and I will evaluate my thoughts and instincts about my and other members of my group's performance, both in preparation and execution of the play. We gathered ideas by brainstorming in our group and we developed our ideas into sequences. One of the ideas was to divide the group in two, acting out the roles simultaneously to improve the dynamics of the play. After receiving some feedback from the target audience we decided to alter this idea as some members found this difficult to follow. ...read more.

I feel our play was affected more by Shane Campbell as he had many useful ideas and was keen to contribute to the play yet both Fiona Teddy-Jimoh and Elizabeth Aylwin also had many valuable concepts. At times we were unable to sustain useable material so we turned to other groups. We were pleased to watch their progress as it would help up with our ideas; they were also exultant to perform as we were capable of leaving feedback. Part 2 Essay Niall Byrne 10F 13/2/07 Page 2 I play a witty and enthusiastic friend to three, although my character is not too bright I am eager to follow the group or come up with plans. Fiona plays an also slow and unintelligent character, she is not joyous and trusting. ...read more.

Split scene - To emphasise the divide between sex As we only performed in front of our class I was comfortable and confident. The main difference for me between the rehearsal and performance was the fact that we weren't allowed to vocalise our new ideas and we could just perform. The reaction from the audience was mixed; some were pleased with our performance whereas others were keen to put across their opinions. I think our performance was slightly less than successful although I think If we put more time into practising instead of brainstorming ideas and developing them, our outcome would have been more positive. I believe we each contributed a lot to the play, each coming up with their own unique ideas which would have made an outstanding play and I believe if we had slightly more time to rehearse we would have performed better on the day. ...read more.