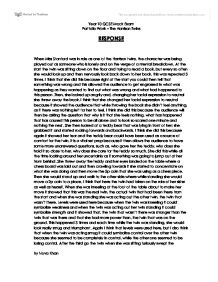 Drama Response - When Miss Stanford was in role as one of the Harrison twins, the character was being played out as someone who is lonely and on the verge of a mental breakdown.

RESPONSE When Miss Stanford was in role as one of the Harrison twins, the character was being played out as someone who is lonely and on the verge of a mental breakdown. At the start the twin was sitting down on the floor and trying to read a book, but every so often she would look up and then nervously look back down to her book, this was repeated 3 times. I think that she did this because right at the start you could then tell that something was wrong and this allowed the audience to get engrossed in what was happening as they wanted to find out what was wrong and what had happened to this person .Then, she looked up angrily and, changing her facial expression to neutral she threw away the book. I think that she changed her facial expression to neutral because it showed the audience that while throwing the book she didn't feel anything, as if there was nothing left for her to feel. I think she did this because the audience will then be asking the question that why is it that she feels nothing, what has happened that has caused this person to be all alone and to look so scared one minute and nothing the next. ...read more.

This is a time when the world is full of sorrow and darkness. I wrote this as for the twin her world was her sister and now that she isn't here, all she sees in her own little world is sorrow and darkness. The world is a place where shadows control your life. I wrote this as it seemed to me like someone was controlling their life because why were they locked up, who locked them up and why were they only allowed a TV. I write that shadows control them because whoever it was had stayed I the shadows and we haven't as yet seen his/her face or how they are related to the twins, what is their connection with the twins. Someone wrote that This is a time when you need your sister. Someone else wrote that The world is a place where you need your friends and family. The objects that we were shown that had been found in the twins' room: * Key for a diary (but no diary) * Key for the door * Key chain with the picture of one of the twins when younger * Two hair pins (very sharp) * Four bracelets (two for each twin?) * Long piece of red string (skipping rope?) ...read more.

We did this because we made it look like those symbolic movements showed her memories as if she was having a flashback of what it had been like in the past when her sister had been alive, with her. I think that from this point we could use hot seating and talk to the mum and the dad of the twins because that would give us some background information about the twins' childhood and perhaps something happened in their childhood that caused them to be locked up. We could do some abstract drama and look at what the twin dreams of to get an inside view on what she thinks about and whether she dreams of her sister or her past about whether something has happened that has caused her to be on the brink of having a mental breakdown. We could have a flash back of her showing us whether she had a traumatic past or not. Diagram of Symbolic movement 1: Diagram of Symbolic Movement 2: Diagram of Symbolic Movement 3: ?? ?? ?? ?? Year 10 GCSE Mock Exam Portfolio Work - The Harrison Twins By Nova Khan ...read more.