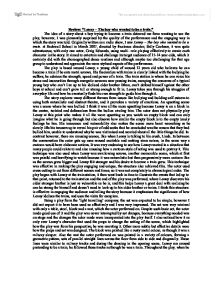 Drama Review: &quot;Lenny - The boy who wanted to be a train&quot;

Review: "Lenny - The boy who wanted to be a train." The idea of a story about a boy trying to become a train deterred me from wanting to see the play, however, I was pleasantly surprised by the quality of the performance and the engaging way in which the story was told. Originally written as a radio show, I saw Lenny - The boy who wanted to be a train. at Backwell School in March 2007, directed by freelance director, Sally Cookson, it was quite adventurous; with only one actor, Craig Edwards, using multi- role playing effectively to create each character in the story. It aimed to entertain and challenge its target audience of 13-14 year-olds, which it certainly did with the choreographed dance routines and although maybe too challenging for that age group to understand and appreciate the more stylised aspects of the performance. The play is based around Lenny, a young child of around 12 years old who believes he can become a train if he eats metal screws. His fascination with trains is clearly linked with the bullying he suffers; he admires the strength, speed and power of a train. The train station is where he can voice his stress and insecurities through energetic screams near passing trains, escaping the concerns of a typical young boy who can't live up to his idolised older brother Ethan, can't defend himself against the other boys at school and can't grow tall or strong enough to fit in. ...read more.

Not only the set and props were used effectively to tell the story but also music. The performance shows the composer, Paul Dodgson, went to a great deal of effort to create the music and different sounds, as the music was very powerful in creating different moods in the play. When Lenny was happy, the music would be upbeat and the tempo quicker which produced a happier atmosphere, whereas in more distressing scenes, for instance when he is being bullied, the pace slows down and unpleasant sound effects are used, like screeching of metal on metal. A harmonica, a small metal instrument was also used in creating the music. The significance of the sound effects being metal, like a train, went unnoticed by the younger target audience and so the effort of the composer was not fully appreciated. However in this bullying scene, contrast in silence and sound is used to create tension when the bullies are first seen, there is a long pause and then a sudden crash as the actor throws the block to the floor and the taunting begins. Pace varied throughout the play, which captured the audiences attention, particularly when sound effects and music was used to build to a climax; for instance, when Lenny is waiting for a train to come the sound of a train slowly builds up in volume, the actor is more excitable and begins to talk quicker and when the train passes the noise of Lenny and the train climaxes. ...read more.

Bullying was another major theme explored throughout the performance, and how role models are romanticised in the imagination through difficult times. I think imagination is a more subtle but major theme of the play. The play is for children about a child, from the child's perspective. This highlights how the play largely to do with Lenny's imagination, and how he uses it to help him through his struggles, imagining he can be a train to overcome the bullying, he can imagine the screws strengthening him to make them easier to swallow. Everything is focused very much on him, even details less likely to be recognised by the younger audience, like the pace and music changing to suit Lenny's mood is evident of this. Not forgetting that one person alone, who is introduced as Lenny and is essentially dressed as Lenny, performs the show. I think it explores how reality can be distorted by imagination, whether to allow yourself to swallow screws, when idolising the brother that flies to school in a hot air balloon or limiting yourself to moving along imaginary 'railway tracks'. It is only when he is stronger and more independent to cope with reality that he can leave the 'railway tracks'. When you step back and look at the situation you find yourself in, despite audience members in your view, the reality of one male grown adult with minimal props and set is distorted by numerous characters, of different age and gender telling the story of a boy who goes from wishing to be a train to finding his self-confidence and building his self-esteem. A play that so effectively initiates and illustrates this powerful imagination is definitely worth watching. ...read more.