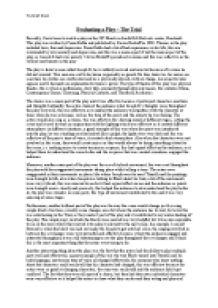 Evaluating a Play The Trial by Franz Kafka

﻿Humzah Dean Evaluating a Play ? The Trial Recently, I have been to watch a play on the 28th March in South Hill Park arts centre, Bracknell. This play was written by Franz Kafka and published by Steven Berkoff in 1981. Themes in the play included love, fear and depression. Franz Kafka had a lot of bad experiences in his life, this was surrounded by over anxiety and depression, and this was a main aspect if not the main aspect of the play, as Joseph K had over anxiety. Steven Berkoff specialised in mime and this was reflective in the stylised movements in the play. The play is about a man called Joseph K; he is unfairly accused and arrested because of a crime he did not commit. Two men are sent to his home supposedly as guards for him, however, his rooms are searched, his clothes are confiscated and he is physically abused, with no charge. An inspector later appears and K demands an explanation but none is given. ...read more.

to life, also when Joseph was talking to Block about his trial, a lot of the movements were very stylised, this was unusual to me but it had a great effect on me and the audience as points were brought across clearly and precisely, this helped the audience to also understand the play better. As the play was comedic in some parts, this type of movement contributed to this and it was very amusing at some stages. Furthermore, another brilliant part of the play was the way the scene would change just by using simple block structures, usually scene changes are a bit where the audience has to wait, but even this was entertaining in the Trial, as they made it part of the play and it contributed to my understanding of the play. The simple ways in which the blocks were moved was very helpful, but it was also enjoyable to see in the ways which they moved it to make it relevant to the next scene. ...read more.

Comedy was over exaggerated through large amounts of the play an example of this was the whipper and his movements and facial expressions brought a lot of humour. In conclusion, I believe that the performance was brilliant and it was very effective, from the stylised movements to the scene changes, the un ordinary aspects of the play made it effective because it exposed the audience to things they may never have seen before, also I believe it was effective because the audience could feel engaged throughout the play. The only aspect I would say that could be improved of this play was some aspects of Joseph K?s character he came across as a very pompous man, he looked down on other characters and at times thought he was above everybody else, he seemed very arrogant and by the end of the play I found it very hard to sympathise with him when he got murdered, perhaps this is what the director wanted to achieve if so, I believe it could be more effective if he was portrayed as a more innocent character. ...read more.