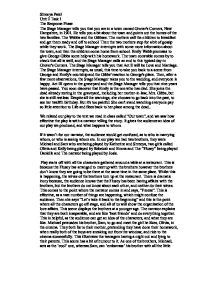 When the girls arrive, Emma is forced to sit with Sam, and Olivia goes to sit with Michael. Emma is unimpressed at Sam, as he attempts to reach over and put his hand on her shoulder, whereas the other 2 starts to get a little too cosy. Olivia then has enough of Michael and his 'games' and therefore runs out with Sam following her. Kelly goes and takes Olivia's place, and begins to question Michael, as to what just happened. The narrator cuts the play here and explains "this is the start of something new". Kelly starts to fall for Michael, and Sam and Olivia, start going out. The best thing at having a narrator is that he can speak about what has been going on between the years and time etc. the narrator, explains how, now we have come to the scene of the wedding between Sam and Olivia and both of them have become close within the last few years. Before the wedding, we see Sam sneakily, saying to the Flusey, also a bridesmaid in this scene, about how he wants to see her in a relationship. He trusts her not to say anything anyone. We get Michael and Kelly, walking in, as a couple, Emma forcing him to be at his brothers wedding. ...read more.

At this point the lights turn on and the then Rebekah and Charlotte are standing up with Nancy l looking terrified, the lights then go off again and then come back on and Charlotte and Rebekah are leaning towards Nancy, the lights then go off again and back on and Charlotte a and Rebekah are close to Nancy with their hands near her body to look like they are about to kill her. The lights going on and off worked effectively as it looked like a flashback and It allowed the audience to get a brief idea of what was happening. After that the lights go off and all you can hear is a loud pitched scream. This worked effectively as it gave the audience an idea what something bad had happened. After the scream she quickly switches places with Katherine to make it look like the beginning scene. Katherine then says "Fine if you won't co-operate, you will later" and kicks the chair behind her and storms out of the room. Rebekah and Charlotte freeze. Josie who plays a girl that got murdered comes onto stage and says "I was the first, but there were more". She stood next to the screen and the there screams and bangs coming from behind the screen. This was effective as it allowed the audience to imagine what was happening instead of seeing it happen. Shreeya Patel Unit 2 Task 1 The Response Phase ...read more.