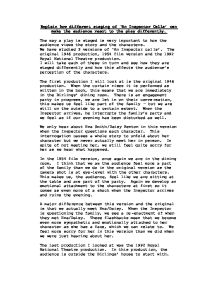 Explain how different staging of 'An Inspector Calls' can make the audience react to the play differently.

Explain how different staging of 'An Inspector Calls' can make the audience react to the play differently. The way a play is staged is very important to how the audience views the story and the characters. We have studied 3 versions of 'An Inspector calls'. The original 1946 production, 1954 film version and the 1992 Royal National Theatre production. I will take each of these in turn and see how they are staged differently and how this affects the audience's perception of the characters. The first production I will look at is the original 1946 production. When the curtain rises it is performed as written in the book, this means that we are immediately in the Birlings' dining room. There is an engagement party in progress, we are let in on their conversation, this makes us feel like part of the family - but we are still on the outside to a certain extent. ...read more.

A major difference between this version and the original is that we actually meet Eva/Daisy. When the Inspector is questioning the family, we see a re-enactment of when they met Eva/Daisy. These flashbacks mean that we become even more sympathetic and emotionally attached to her character as she has a face, which we can relate to. We feel more sorry for her in this version than we did when we were just hearing about her. The last production I looked at was the 1992 Royal National Theatre production. In this production, the audience is outside the Birlings' house to start with. The house is set away at the back of the stage, quite high up and appears to be quite 'spooky'. This means the audience are looking up to the house and it makes it seem bigger, more detached yet more dominating. ...read more.

This humiliates them in front of their family and the audience. In this production, there is one similarity with the first, original version. The way Eva/Daisy is portrayed is common to both, you never actually see her, you just hear about her through other characters' confessions. All three different productions use different prop positions and acting methods. The original and the 1954 film version are quite similar as they use the same ways to get you to relate to the family but the 1954 version is much more successful in gaining sympathy for Eva/Daisy as you actually meet her character. The 1992 play is quite different to the others in all ways apart from that the story of Eva is still only described to us and we don't meet her. I think that the 1954 version is the most effective as it makes much more use of location, light and cast position because it is a film. I also think this version makes more use of the Eva/Daisy character and exaggerates the quite spooky, mysterious Inspector. ...read more.