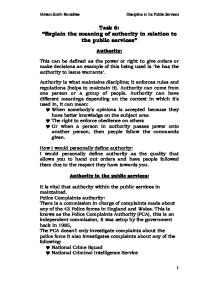 &quot;Explain the meaning of authority in relation to the public services&quot;Authority:This can be defined as the power or right to give orders or make decisions an example of this being used is

Task 6: "Explain the meaning of authority in relation to the public services" Authority: This can be defined as the power or right to give orders or make decisions an example of this being used is "he has the authority to issue warrants". Authority is what maintains discipline; it enforces rules and regulations (helps to maintain it). Authority can come from one person or a group of people. Authority can have different meanings depending on the context in which it's used in, it can mean: ? When somebody's opinions is accepted because they have better knowledge on the subject area ? The right to enforce obedience on others ? Or when a person in authority passes power onto another person, then people follow the commands given. How I would personally define authority: I would personally define authority as the quality that allows you to hand out orders and have people followed them due to the respect they have towards you. Authority in the public services: It is vital that authority within the public services in maintained. Police Complaints authority: There is a commission in charge of complaints made about any of the 43 Police forces in England and Wales. This is knows as the Police Complaints Authority (PCA), this is an independent commission, it was setup by the government back in 1985, The PCA doesn't only investigate complaints about the police force it also investigates complaints about any of the following: ? ...read more.

We still expect our investigation into the shooting to be completed by the end of December. The results of our investigation will be made public once the legal processes are completed." Speaking about the new investigation, Mr Hardwick added: "We will treat this investigation in the same way as any other, although I have asked a panel of three IPCC Commissioners to oversee it. We have not made any assumptions and for the sake of Jean Charles' family, officers within the MPS and the public at large, will try to establish the truth in an impartial, proportionate and timely way." Power: I would personally define power as the ability which you have to get people to obey your orders. The dictionary definition of power is: "the ability to do or act; mental or bodily faculty; influence, authority; ascendancy; authorization; influential person; state with international influence; vigour, energy. The definition given in BTEC National Public Services Book 1 is: "The capacity or ability to make a person perform a task that goes against their interests " A study carried out by Raven on 1965 found that there where six bases of power are ? Reward power ? Coercive power ? Informational power ? Expert power ? ...read more.

from higher ranking people within an organization. Obedience occurs when people obey commands/orders from others to do something. Military leaders give commands that they expect to be followed without question, this is vital because troops need to be trained to follow orders and follow them so that if they are ever in a dangerous situation they can do their job effectively without to stop and evaluate which would take up time and can put the whole of the troops life at risk. But this also has its down sides, such as the events that occurred in Nazi Germany if more people had questioned what they where doing many lives could have been saved. So basically obedience can be a very good positive aspect of everyday life, especially within the public services. Nevertheless there can also be tragic consequences of obedience if it used in the wrong way. People obey and carry out actions that they may think are wrong because People in authority who issue the orders take away the responsibility from those who obey. For example, the person who obeyed would probably say 'I was only carrying out orders' or because the people in authority often possess visible badges or signs of their superiority. These consist of special uniforms and titles. Having such obvious reminders of who's in charge, most people find it difficult not to obey. ?? ?? ?? ?? Miriam Smith-Renieblas Discipline in the Public Services 1 ...read more.