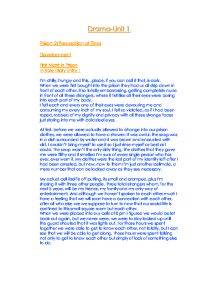 Drama-Unit 1 Prison 2/Perception of Time Development First Night in Prison In Role Diary Entry 1 I'm chilly, hungry and this...place, if you can call it that, is dark. When we were first bought into the prison they had us all strip down in front of each other, it so totally embarrassing, getting completely nude in front of all these strangers, where it felt like all their eyes were boring into each part of my body. I felt each and every one of their eyes were devouring me and consuming my every inch of my soul. I felt so violated, as if I had been raped, robbed of my dignity and privacy with all these strange faces just staring into me with cold steel eyes. At first, before we were actually allowed to change into our prison clothes, we were allowed to have a shower. It was awful, the soap was in a dish surrounded by water and it was brown and encrusted with dirt, I couldn't bring myself to use it so I just rinse myself as best as I could. The soap wasn't the only dirty thing, the clothes that they gave me were filthy and it smelled I'm sure of every single person who has ever, ever worn it. My clothes were the last part of my identity left after I had been arrested, but now, now to them I'm just another cellmate, a mere number that can be locked away as they see necessary. ...read more.

of bond that we had formed and possibly even friendships which was to show that even in such a dismal situation you can still find a way to connect. The only change I would have made to my character in the improvisation is that I could have reflected more of what had happen to her in the past, and I could have shown how it had affected how she reacted to certain situations as I felt that my performance lack the feeling of history or a past as during my role play I did not mention my family or why I had been put into prison. My character is not the only thing that I would have changed in our Improvisation because even though we brought through the idea that we knew each other well, there was still the feeling that we didn't know much about each other's past as the discussion that we had with each other in our cell was mainly based on what was happening at present time rather than having any reflection of what had happened in our pasts. I don't think this mattered much as the point of the improvisation was to show that we knew each other so well that we were no longer interested in each other's past as we knew it all already, and I feel quite positive that this aspect was shown throughout the entire role-play. ...read more.

Their play was about someone taking drugs and feeling its effects. * They showed us how the person felt that everyone around was moving slower than them. * The way that each person in the group related to each other showed a sign of real friendship. * The play was set in a nightclub and the group were able to show a real use of space, this was done by them spreading out the set by having the toilets over in a different corner so we had a real feeling that their friends really couldn't see what was happening in them. * The group set the play so that when 2 members of the group were in the toilet taking drugs the others were outside moving in slow motion * The point at which the friends actually took the drugs was done in slow motion to emphasis the importance of the scene as this was the part of the play that was focusing on the whole idea of making a decision. * After this the friend who had a bad reaction to the drugs moved extremely fast while the others were moving in slow motion this emphasis to us and it allowed us to realise that this was all due to the effects of the drugs that the friend had taken previously in the toilets. This and the other plays allowed me to see into how because of a certain situation people can feel that time is moving extremely slow or extremely fast, which was just a reflection of the whole theme of the Perception of Time. ...read more.