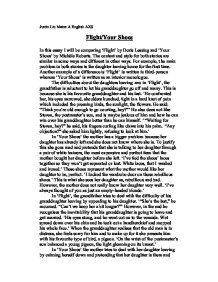 Justin Liu Maine A English AXS Flight/Your Shoes In this essay I will be comparing 'Flight' by Doris Lessing and 'Your Shoes' by Mich�le Roberts. The content and style for both stories are similar in some ways and different in other ways. For example, the main problem in both stories is the daughter leaving home for the first time. Another example of a difference is 'Flight' is written in third-person whereas 'Your Shoes' is written as an interior monologue. The difficulties about the daughters leaving are: in 'Flight', the grandfather is reluctant to let his granddaughter go off and marry. This is because she is his favourite granddaughter and his last. 'He confronted her, his eyes narrowed, shoulders hunched, tight in a hard knot of pain which included the preening birds, the sunlight, the flowers. He said: "Think you're old enough to go courting, hey?"' He also does not like Steven, the postmaster's son, and is maybe jealous of him and how he can win over his granddaughter better than he can himself. ...read more.

'If I wrap my arms around myself and hold tight it keeps the pain in. Stops it spilling out and making a terrible mess. If I keep my mouth pursed tight I can't scream or throw up. If I imagine that you're gone for good, that you'll never come back, then this terrible wailing sound will begin and never stop, I might go mad.' Just as in 'Flight', the mother tries to appeal for her daughter to come home, this time, however, through her mind. In 'Flight', what I think the author wants to say is the idea about the problems of letting young people grow up and leave home. This sometimes can be quite hard for some adults just as it is for the grandfather. The story is written in third person and let us see everyone's point of view as well as the grandfather's. '"You never liked it when we married," she said. "Why not? Every time, it's the same. When I got married you made me feel like it was something wrong." ...read more.

'It seemed to the old man that the whole afternoon had stilled to watch his gesture of self-command, that even the leaves of the trees had stopped shaking.' In 'Your Shoes', the way the author makes me respond to this situation is the opposite seems to happen compared to 'Flight', the Justin Liu Maine A English AXS Flight/Your Shoes (cont...) mother's condition clearly gets worse and lapses into madness at the end. 'Laces like strings of white liquorice. They taste sweet.' Again there is the symbolism of the shoes and again it represents the way the mother would like her daughter to be. I prefer 'Flight' to 'Your Shoes' because the story is much clearer and you get to see everyone's point of view whereas in 'Your Shoes' the storyline is not so clear and harder to understand because only one person is speaking. However, 'Flight' has less detail than 'Your Shoes' because there are many more people to focus on. For example, in 'Your Shoes' you know who is still alive and who is not whereas in 'Flight' it is not as clear. However, I enjoyed both stories and thought that they had more similarities than differences. ...read more.