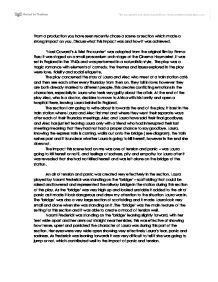 From a production you have seen recently chose a scene or section which made a strong impact on you. Discuss what this impact was and how it was achieved.

From a production you have seen recently chose a scene or section which made a strong impact on you. Discuss what this impact was and how it was achieved. 'Noel Coward's A Brief Encounter" was adapted from the original film by Emma Rue; it was staged on a small proscenium arch stage at the Cinema Haymarket. It was set in England in the 1940s and was performed in a naturalistic style. The play was a tragic romance with elements of comedy, the themes and issues explored in the play were love, fidelity and social etiquette. The play concerned the story of Laura and Alec who meet at a train station caf� and then see each other every Thursday from then on. They fall in love; however they are both already married to different people. This creates conflicting emotions in the characters, especially in Laura who feels very guilty about the affair. At the end of the play Alec, who is a doctor, decides to move to Africa with his family and open a hospital there, leaving Laura behind in England. ...read more.

The 'bridge' was the main feature of the setting for this section and it was able to create a mood of tension well. Naomi Frederick was standing on the 'bridge' leaning slightly forward, with her feet wide apart and her arms out straight near her sides, this was effective at showing how tense, upset and panicked the character of Laura was during this part of the section. Her eyes were very wide open showing very effectively Laura's fear, panic and sadness. As Frederick was leaning forwards it was very difficult to tell if she was going to jump or not, which contributed well to the impact of panic and tension. Whilst Laura was standing on the 'bridge' the lighting was mainly focused on the bridge and Laura, with a spot light on Laura and the bridge and the rest of the stage almost not lit at all. This was very effective at drawing attention to Laura adding to the mood of panic, and the bright lights shining on her made her look very small and created feelings of pity and sadness for her and her situation. ...read more.

After the train passed there was a quick and sudden blackout, this was effective in adding to the feeling of panic, as I was not sure whether Laura had killed herself or not. The acting in this part of the section was also effective but at creating sympathy and empathy for the character of Laura, after the screen had been dragged across the stage Naomi Frederick relaxed her arms and dropped her shoulders, and bowed her head to show how deflated, upset and defeated Laura was. After the loudness of the train passing the silence in this part of the section was very effective at creating sympathy for Laura as it made her seem very small and alone as she stood in the silent, empty station. Overall the section was very effective in creating a mood of tension and panic, and then feelings of intense sympathy and pity for Laura as she stood alone high up on the empty bridge. All the different elements of the section, especially the acting, lighting and sound worked together very well to create the impact the section had on me and it was very effective and moving section of the play. ...read more.