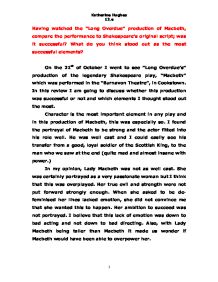 Having watched the &quot;Long Overdue&quot; production of Macbeth, compare the performance to Shakespeare's original script; was it successful? What do you think stood out as the most successful elements?

Having watched the "Long Overdue" production of Macbeth, compare the performance to Shakespeare's original script; was it successful? What do you think stood out as the most successful elements? On the 21st of October I went to see "Long Overdue's" production of the legendary Shakespeare play, "Macbeth" which was performed in the "Burnavon Theatre", in Cookstown. In this review I am going to discuss whether this production was successful or not and which elements I thought stood out the most. Character is the most important element in any play and in this production of Macbeth, this was especially so. I found the portrayal of Macbeth to be strong and the actor fitted into his role well. He was well cast and I could easily see his transfer from a good, loyal soldier of the Scottish King, to the man who we saw at the end (quite mad and almost insane with power.) In my opinion, Lady Macbeth was not as well cast. She was certainly portrayed as a very passionate woman but I think that this was overplayed. ...read more.

This showed us their supernatural power as they were able to appear in any shape. Their costumes and masks were very effective. The masks lacked human qualities, but in saying that they did have vague human features which were contorted. Their posture was very good and their movement was well choreographed. It added to the theme of supernatural. The background, setting and staging are vitally important to every play and "Long Overdue's" had an unusual setting. They used a minimalist style of staging. This was a deliberately low budget production therefore there could not be any vast scene changes. Also, they are a touring company so the setting and staging needed to be easily transported. (This is avant-garde style acting so avant-garde setting had to be used because traditional setting would look out of place.) I thought that the staging was very clever. There was only one main prop, which could be portrayed as many things such as a bed, a rock and battlements of the castle. ...read more.

In the some productions we see unusual devices used which make the production stand out. In this production the thing that stood out where the dragons and the narrator A narrator is an unusual device, which was not used in Shakespeare's original script. This was useful for the people who did not understand the play, fully and allowed scenes to be omitted. The Chinese dragons have no link to "Macbeth" itself but symbolically they showed they showed the battle between Scotland and Norway. This made us sit up and pay attention from the beginning. It could also have represented the battle between good and evil throughout he the play. In conclusion, this production was very different from Shakespeare's original text. This is what the directors' intention was. It was not accidental. I believe that the different and avant-garde style worked very well but I still think that there were some weaknesses such as Lady Macbeth's inability to show ambition, but overall I believe this production to be a success, especially for a young audience. Katherine Hughes 12.e 1 1 ...read more.