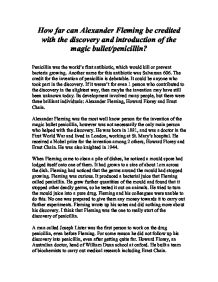 How far can Alexander Fleming be credited with the discovery and introduction of the magic bullet/penicillin? Penicillin was the world's first antibiotic, which would kill or prevent bacteria growing. Another name for this antibiotic was Salvarsan 606. The credit for the invention of penicillin is debatable. It could be anyone who took part in the discovery. If it weren't for even 1 person who contributed to the discovery in the slightest way, then maybe the invention may have still been unknown today. Its development involved many people, but there were three brilliant individuals: Alexander Fleming, Howard Florey and Ernst Chain. Alexander Fleming was the most well know person for the invention of the magic bullet penicillin, however was not necessarily the only main person who helped with the discovery. ...read more.

He tried to turn the mould juice into a pure drug. Fleming and his colleagues were unable to do this. No one was prepared to give them any money towards it to carry out further experiments. Fleming wrote up his notes and did nothing more about his discovery. I think that Fleming was the one to really start of the discovery of penicillin. A man called Joseph Lister was the first person to work on the drug penicillin, even before Fleming. For some reason he did not follow up his discovery into penicillin, even after getting quite far. Howard Florey, an Australian doctor, head of William Dunn school at oxford. He built a team of biochemists to carry out medical research including Ernst Chain. ...read more.

This makes them just as much heroes as Fleming. The USA government had made grants available to firms wishing to buy expensive equipment to make penicillin. This was a great help in the discovery of penicillin because it helped to spread the word that it was a major cure for infectious diseases. Also that the USA is so big compared to England, there are loads of places to manufacture penicillin. I believe that everyone who took part in the discovery of penicillin should be credited for it, even Lister. However Fleming, Koch and Florey should take most credit for the discovery because they played the biggest parts in it. This is because if it weren't for Fleming, then Koch and Florey wouldn't have seen the articles about penicillin, and if it weren't for Koch and Florey, then who would have continued on with the knowledge known so far on penicillin. Adam Scott. ...read more.