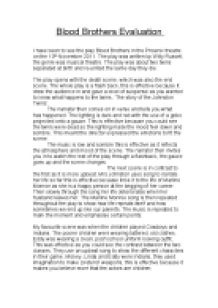 I have been to see the play Blood Brothers in the Phoenix theatre on the 10th November 2011.

﻿Blood Brothers Evaluation I have been to see the play Blood Brothers in the Phoenix theatre on the 10th November 2011. The play was written by Willy Russell, the genre was musical theatre. The play was about two twins separated at birth and re-united the same day they die. The play opens with the death scene, which was also the end scene. The whole play is a flash back, this is effective because it drew the audience in and gave a level of suspense as you wanted to know what happens to the twins, ?The story of the Johnston Twins?. The narrator then comes on in verse and tells you what has happened. The lighting is dark and red with the use of a gobo projected onto a gauze. This is effective because you could see the twins were dead so the lighting made the mood feel down and sombre. This meant the director expressed the emotions to fit the scene. The music is low and sombre this is effective as it reflects the atmosphere and mood of the scene. ...read more.

Mickey, Linda and Eddy were Indians, they used imagination to make ?pretend? weapons, this is effective because it makes you believe more that the actors are children. Another scene I liked was when the boys were living in the countryside and were both going to school. They were now 14 years old, you could see that the age of the boys has changed because of the way they dressed and their characterisation skills to show they had got older. There was one actor that played both teachers in Eddy?s school and Mickey?s school. It was effective because the teacher made the transition from one teacher to another on stage, he started of as the posh teacher and then changed to the more lower class school he took of his robe and ruffled his hair. It helped the audience to understand the differences between the classes. I also thought the scene when Mickey and Linda were arguing over the medication Mickey was on was effective because the actors made a realistic, emotional argument. ...read more.

I really enjoyed the play because it kept me interested and in captivated throughout. I liked all of the key scenes including the beginning and end scene, when the two boys met and many more. If I had to pick a favourite scene it would be it would be when the children were playing cowboys and Indians. It was my favourite scene because it was a bubbly fun scene where the adult actors playing children successfully with amazing use of characterization skills. I also liked it as you could see the contrast from children to adults when they where playing with toy guns and then later on at the play Mickey kills himself and Eddie with real guns this was effective as it shows how the characters have grown and developed over the years. In some scenes I felt empathy for the characters. In the scene where Mickey and Linda argue over Mickey?s medication I felt sorry for Linda as she was only trying to help Mickey but he still argued and upset her. ...read more.