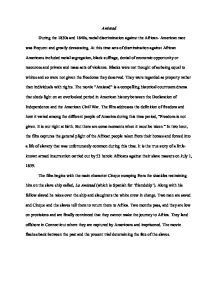 Amistad During the 1830s and 1840s, racial discrimination against the African- American race was frequent and greatly devastating. At this time acts of discrimination against African Americans included racial segregation, black suffrage, denial of economic opportunity or resources and private and mass acts of violence. Blacks were not thought of as being equal to whites and so were not given the freedoms they deserved. They were regarded as property rather than individuals with rights. The movie "Amistad" is a compelling historical courtroom drama that sheds light on an overlooked period in American history between the Declaration of Independence and the American Civil War. The film addresses the definition of freedom and how it varied among the different people of America during this time period, "Freedom is not given. ...read more.

The film begins with the main character Cinque escaping from the shackles restraining him on the slave ship called, La Amistad (which is Spanish for 'friendship'). Along with his fellow slaved he takes over the ship and slaughters the white crew in charge. Two men are saved and Cinque and the slaves tell them to return them to Africa. Two months pass, and they are low on provisions and are finally convinced that they cannot make the journey to Africa. They land offshore in Connecticut where they are captured by Americans and imprisoned. The movie flashes back between the past and the present trial determining the fate of the slaves. The movie depicts Cinque as a character with a mix of proud dignity, righteous determination and incredible charisma. ...read more.

As the movie continues the context becomes more important with the language barrier between the slaves and the team defending them. Imagery is deliberately used to highlight the many facets of the story. The journey of Cinque from his capture in Africa to his arrival on the Amistad is downright brutal with graphic depiction of the dehumanizing treatment at the hands of his captors. Although the film is described as being somewhat historically flawed, it does not take away from the fact that it is a well-crafted film that not only instructs, but entertains as well. Though the film does not quite have a literary feel, but is mostly cinematic, it is a moral story with a positive message featuring bold characters and emotionality which draws its audience in. La Amistad is artfully crafted, engaging, and is truly an unforgettable film that everyone should see. ...read more.

This essay begins to consider director's choices and how these are used to represent different messages. The ideas of structure and form begin to be explored but could be looked at in more depth with more specific and frequent references to the film being used.